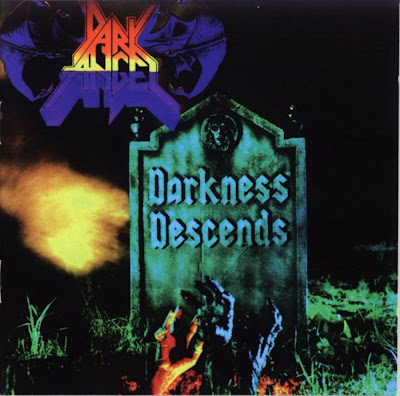 I like Dark Angel simply because they were the most German sounding American thrash band of the '80s. They were all skilled, but they also weren't afraid to be a bit rough around the edges, and they fucking played fast. Most will agree that Darkness Descends was the band's benchmark release, but I would go as far as to say it is one of the five best American thrash albums of all time.
Here
Posted by Aesop at 1:05 AM

You just made my weekend. I'm still a little mystified as to why I never grabbed this back in the day. It's not like it was hard to find. I bought Rigor Mortis at Kmart for fuck's sake. Anyway, better late than never. These guys were the epitome of evil thrash! Thanks man!

I vividly remember seeing early shots of Gene Holgan and thinking, "That guys with the sunglasses looks like a total degenerate. This has GOTTA be for me!"

Aesop, I totally agree with you about Dark Angel being one of the top 5, but which 4 other albums round out that list for you? Would you include their "Leave Scars" album? I totally would...

On my occasional DJ gigs, I always make sure that Burning Of Sodom and Merciless Death are on the playlist. ;)

Others on my list: Exodus "Bonded By Blood"
Slayer "Hell Awaits," and despite not really liking the vocals, Vio-Lence "Eternal Nightmare" is a riff bonanza.

never liked the vocals on eternal nightmare either, took me some time. still dont much lol

Carnivore should be included (Thrash, Speed, Cross-over.... whatever).

Carnivore's self titled was a blast. Loved it. The second, not so much, although other listeners prefer it. I also prefer Morbid Saint to Vio-Lence, too.

"show no mercy" and "kill em all" would be on top but not sure they count as fully formed thrash.

Best review I ever read about Dark Angel, I think it was Alan Moses or Kevin Sharp who wrote about their live EP: "This is the sound of fat men sweating to loud distortion." That's when I knew they were for me.

So Aesop, what's your take on Leave Scars? Are you a Don Doty dude or a Ron Rineheart dude? This is what we should be asking ourselves on this somber day...

I found both "leave scars" and "time does not heal" to be pretty boring, go-nowhere stuff.

this album totally rules. i remember the first time i heard "burning of sodom",that scream,that fucking speed,that slicing guitar tone..that was the shit

definitely don doty. his vocals on this album were sick. that ron rinehart dude was too "bro" for me,all shaking hands with the crowd 5 times a song,too much "Yeah,c'mon,alright!!!!"