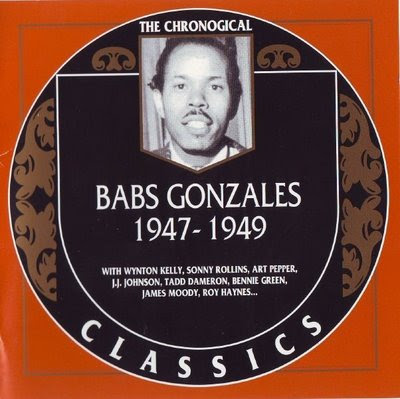 Babs Gonzales was born Lee Brown in 1919. He was Errol Flynn's chauffer, which was probably a fairly assy gig if you think about it. Anyways, eventually his propensity for the Jazz Vocalese style landed him some gigs singing with luminaries like Charlie Barnet and Lionel Hampton. In 1947 Babs formed his own band and recorded a slew of singles for Blue Note between '47 and '49. These sessions yielded a minor hit for Gonzales in "Oop-Pop-a-Da," a song made even more famous when it was added to the regular repetoire of some guy named Dizzie Gillespie. These sessions featured some top notch players (check the names on the cover) including Sonny Rollins doing some of his first studio work. These Chronological Classics editions are great primers, or catch-all type affairs, and this collection of Babs Gonzales' work is no different. Pop a Doo this shit and get wild with it.
Pop-A-Dow!!!
Posted by Aesop at 1:28 AM

I've been needing to move on from fats waller...Thanks for the lead

Sa-weet! Thanks much for this one. Similar to Slim Gaillard's stuff and just the thing for this cruddy afternoon.

Cool stuff. You can hear how much this inspired some of Dizzy's choruses. I didn't know about this guy -- thanks for turning me on to him.

Never heard of him till now; thanks for the heads-up...