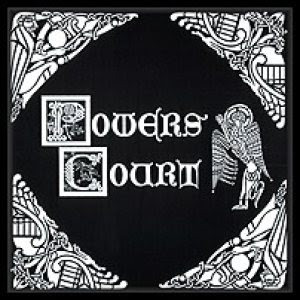 Powers Court is a long running traditional Heavy Metal band from Illinois. The centerpiece of the band's sound is the amazing vocals of Danie Powers. Powers toggles effortlessly between a King Diamond shriek into lower registers (I swear at times she sounds like Mr. Scarface from the Geto Boys as well as a dozen others) Sure, this debut suffers from some sort of oddly flat production, but couple that with the vocal acrobatics of Ms. Powers, and you have another compelling piece of bizarro metal born of the love of steel. Their is a purity-of-intent to Powers Court that makes them a thousand times more interesting than all your Hammerfalls and Rhapsodys combined. Seriously, don't blow this opportunity to spend a little time with one of the strangest and most sincere bits of true American Heavy Metal. Powers Court rules.
Here
Posted by Aesop at 12:05 AM

This is awesome! And I am from Illinois! In other words, this is some back-world shit! Thanks Aesop!

What an awesome band! Check out this one as well http://grimmerthanthou.blogspot.com/2010/12/powers-court-red-mist-of-endenmore.html

Great post, hard to find a newer band with this balance of power and idiosyncratic character. Thanks a bunch, pumpin' it loud in the bullshit town of Barrie, Ontario.