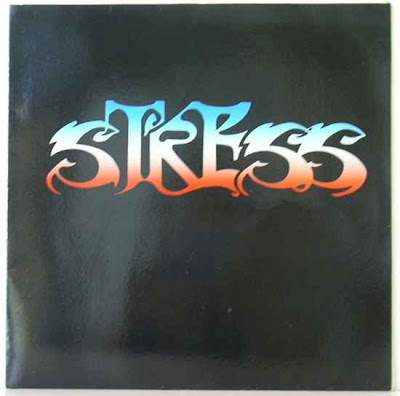 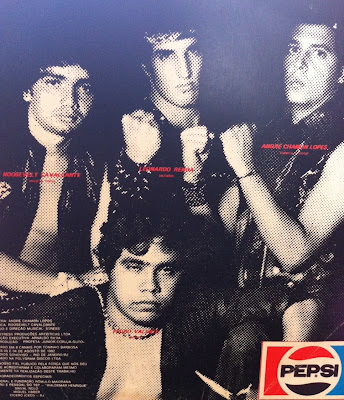 The Wizard of the second most awesome blog on the interweb, is easily one of my favorite people on earth. We have shared a room, risked life and limb on tour together, and laughed heartily at one another's farts. Today he writes me:
Hi dude. Hope you are well.I got this record in Brasil, shit rules. Bought it from a street vendor who pulled out a bunch of metal when we walked up...well, at least he said it was metal but it was a pile of hopelessly partied on pop punk. I gave up, and then a local dude said I should check this out, said they were the first speed metal band from Brasil, and that they came from Belém, where we were. The vendor put it on, and I was hooked from the drum intro.Not sure what the deal is, but the record appears to have been released (or sponsored) by Pepsi, and please check out how fried (or disabled) Pedro is at the bottom of the band photo - that guy is responsible for these Deep Purple meets Motorhead licks. Tough to scour for info on a band called Stress, but there's a quote on Metal Archives from the singer about how he thinks that they should be considered the true speed metal pioneers since this LP came out a year before Kill 'em All. Pretty ballsy.
The Wizard went on to say that this may be up the alley of The Hearse riders and urged me to share this rare gem of Pepsi-sponsored Brazilian Dirt Metal weirdness. I have already listened to it three times, it is fucking awesome bit of fuzzy guitars, captivating hooks, and just plain out great rocking Heavy Metal. Already know this will be in heavy rotation in the next few weeks. What an amazing find. Thank you Wizard, once again you prove most badass.
STRESS!
Posted by Aesop at 12:00 AM

Haha! Stress was probably the first metal band from Brazil. About a year or two ago there was made a documentary about the old metal scene here ("Brasil Heavy Metal", from 2009, i think), and it featured interviews with the guys from this band (as well as with the people from Volcano, Sarcófago, Chakal, and other bands who were a little more obscure).
If you want more info about these bands, maybe you should check it out.
Don't know if you'll find subtitles for it though...

hell yes, saw this on your facebook yesterday and loved it. thanks to both of you guys for sharing this album, gonna grab it soon.

p.s. so is dude on the bottom disabled or indeed just fried? and pepsi, wtf?

haha also captcha is "schlogi" kinda wish that was my nickname. wait, no i dont but i wish i knew someone named schlogi.

Album of the year? No. Album of year for 1982? No, but should have been. Metal album of the last half century? Maybe.

thank you Aesop and Wizard

and thank you Brazil

This shit is righteous as fuck.