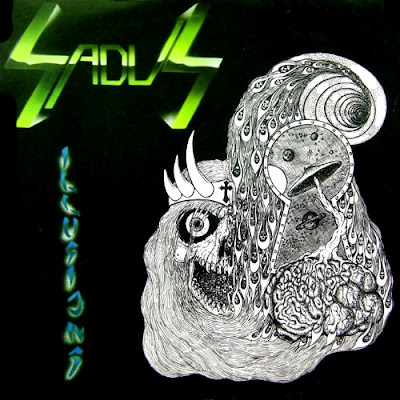 One of the most perplexing album covers in Bay Area thrash metal history, and one of the more interesting releases to come from that fertile scene. Sadus hailed from Antioch, a bullshit town about a half hour's drive north of the bullshit town I call home. Antioch was a gold rush town, settled in 1850, it is one of the oldest cities in California. As well as Sadus, the town can boast notable natives like The Mitchell Brothers, and a bunch of stupid football players that I could' t give a rat's ass about. Anyways, the four disenfranchised bangers of Sadus combatted the dusty ennui of Antioch life with lots and lots of weed, sci-fi novels, horror movies, and the proto-death metal thrash of Possessed, Kreator, Slayer, and Death. Darren, Rob, Steve, and Jon, formed Sadus and took their time honing their sound and chops with a few demos, but waiting almost four years after their inception to cut a proper album. Their patience and commitment paid off, Illusions is an astonishing achievement of breakneck tempos, precision playing, and unhinged mania. On their first album Sadus were already faster, tighter, and more inspired than any of their peers or influences. Why Illusions isn't hailed as a classic, a milestone, and a thrashterpiece of unparalleled aggression is completely unbeknownst to me. The cover art perhaps?
Here
Posted by Aesop at 12:00 AM

thanks! for this and all your recommendations.

Hahaha I have a cousin who lives in Antioch! Illusions rule so much, it doesn't get enough love. I love how the drumming is so frenetic that it feels like the kit is about to break apart during the song.

I grew up in Concord, which is a bullshit town a bit closer to Antioch. Back then, there were two (and *only* two) reasons to take the short drive out to Antioch: Rock Bottom Records, and to score good cheap weed.

I very briefly had a bullshit zine called "Rivers of Blood" back then (`88, `89), and wanted the first issue to highlight the East Bay metal scene. Or, at least bands from the East Bay.

Death Angel used to hangout at my work (KVHS 90.5 FM), so they were easy to track down and get a bullshit interview from. Phlegmbile too, though no one knows/remembers them. Hexx were cool cats, though a bit stoned at the time!

Sadus were hard to pin down for an interview (work schedules, missed phone calls, etc). But I did bump into Darren and Jon at Rock Bottom Records, and they were cool as hell. But no interview.

Would "Rivers of Blood" have been the next "Slayer Magazine", had I (1) ever bothered to publish it, and (2) had I been as fanatic as “Metalion”? Probably not.

Anyway, great post on a great album that seemingly always gets overlooked. At the time, Sadus were too fast/aggressive for the Bay Area Thrash Metal scene, and a bit out of the loop in the proto-Death Metal scene. Had they set up shop in Florida vice the bullshit town of Antioch, the Death Metal world as we know it may have wound up just a wee bit stronger/faster.

This album is, on all accounts, a fucking masterpiece of vicious Thrash that no-one ever came close to cloning.

whoa, thanks for this!

DEATH TO POSERS was the name of their preceding demo.

I got a copy of this from a friend on cassette back in the mid Nineties. It lived in my kitchen for years. I liked to listen to tapes while I washed the dishes. This one ruled.