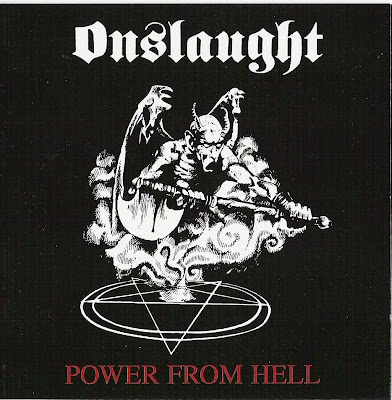 When I wrote about Black Uniforms I mentioned Onslaught, then realized I haven't featured the British thrash masters on the Hearse before. Onslaught started in 1983 in the bullshit town of Bristol as a punk band, but by 1985 the young men of Onslaught were possessed by Satan and opted to play more metal on their debut. You can still here plenty of Discharge influence, and I think this is precisely why Power From Hell is Onslaught's best release, and one of the coolest thrash albums of the 1980s. With each album, they became less punk, more polished, and eventually enlisted Steve "Grim Reaper" Grimmett to front the band for 1989's underwhelming In Search of Sanity. Onslaught reformed in 2006 and has since released two more studio albums, but I have no idea if they are worthwhile or not. I don't need to know, I have Power From Hell on three formats.
Power!
Posted by Aesop at 12:00 AM

Got 'Killing Peace'. It's OK, but needless to say it's no 'Power From Hell'. I was pleased however to see them live a couple of years ago

Discharge indeed! I only knew the silly `Let There Be Rock´ cover from the late 80ties and dismissed the band as disposable. But this is great stuff, thanks a bunch!

amongst my favourite thrash albums.

Great great album fred. Ya know... You would have thought that "In Search Of Sanity" would just kill but alas you pegged it. Underwhelming. Anywho "power From Hell" does plenty of killing.

Thanks! Just in time for their US tour this March! Hopefully they'll have this available on wax during the tour! You going Aesop?

Yes, I believe Evil Dead are supporting them in SF

great album. i only heard them years ago due to forca macabra's cover of the song "power from hell." crushing stuff.

Just saw the Onslaught tour poster and right next to it was a flyer for an upcoming Possessed show. Anyways thanks.