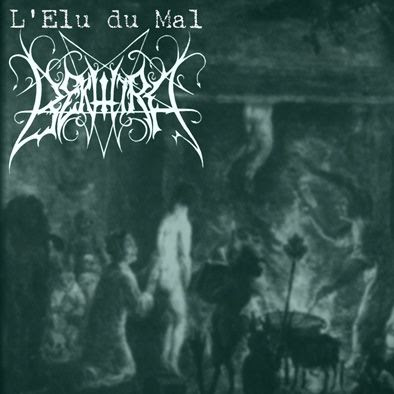 Easily one of the greatest monuments to French Black Metal supremacy is Bekhira's stunning debut L'Elu du Mal. Every track bristles with shimmering melodic tremolo picking, blasting washes of drums, and distant anguished vocals. The Paris-based band is an elusive entity, only releasing one demo, a split with Desolation Triumphalis, and this colossal album over the seventeen years since their formation. Member Arkdae has kept consistently busy with his Neo-folk band Dark Sanctuary, while Raktivira has worked with other French kults Osculum Infame and Arkhon Infaustus. The members of Bekhira consider the band to be active, but not a word about new material has surfaced. Hopefully there is more Bekhira to come, in the mean time get with this bit of evil.
Mal
Posted by Aesop at 1:01 AM

this is one of my favorite and most memorable french releases ever. excellent call. tracks 1 and 4 are almost epitomes of the scene.

any fan of black metal should hear this period, and if you are, you wont regret it!

I remember talking to you about this band, cool to finally see them up here. Had always been planning a TBO post on this, but you've beaten me to it. Curses. Didn't know this guy had a neofolk band, definitely checking them out!

Btw, while Bekhira aren't NSBM per se, they seem to fall pretty squarely in the French tradition of implicit racism. Though for them it may be more of a metaphor/shock tactic. Whatever, this shit rules.

I've never heard this before, more than appreciate it you sharing it here. Instant love for this release.

The demo tape crushes all as well. Malkira is active is innumerable other bands, as is Arkdae... French fanatiscism still destroys all others...