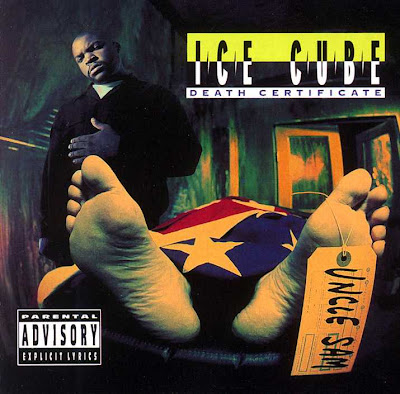 Ice Cube's angriest outing since leaving NWA was by far 1991's Death Certificate. On this record no one is spared Cube's wrath and biting criticism. Be you black, white, a bitch, a ho, a Korean liquor store owner, a sellout, Uncle Sam, the police, you can't escape the sharp sting of Cube's always brilliant lyrics and keen observations. This is where it became abundantly clear to me that Cube was the true genius behind NWA. This record is essential. Kind of weird that this is the same guy who starred in "Are We There Yet?" But I choose not to think about that.
Here
Posted by Aesop at 12:16 AM

this is one of the greatest albums ever made.

i wonder what it's like for parents who've never heard of ice cube to be exposed to him in the opposite order. "hey, look kids, a cd by the guy from 'are we there yet?' we should listen to this on our road trip."

Predator is pretty good as well

This record is so brutal, so pissed-off and so essential. Kids don't even know how ill Cube was on his first couple of solo albums. By the time The Predator, his big breakout album, came out, he had already softened up quite a bit.

Thank you, i have been wondering what i should get from ice cube for a while, and now i have this, thanks
Aesop

I love it. One of the first rap albums I got into as a kid. Cube was so damn hard in the day.

cubes rappin is fuckin dope,the mufucka is ill to the fullest

his family movies- meh,i dont like none of that corny shit,it aint funny to me at all and about as offensive as cotton candy

Damn! I always loved this one, but i never checked out Willie D until you posted him. I had a rad time listening to that Controversy album in the bathtub with some $4 wine. Are you gonna post Lench Mob or Kam next?

"you'll hear more claps than the coliseum"! a classic if there ever was one. thanks dude!
-jb

holy synchronicity...i just went on a dl'ing spree of all this classic stuff recently. good to see it here.

thanks man. this site rules. i'm not a fuckwit anymore.

Cubes first solo album Amerikkkas most wanted is a great album as well with a heavy Public Enemy influence to it thanks not only to the vocal work of flavor and Chuck D but this album was also produced by Public Enemies production team The Bomb Squad.

I'm fond of all of Cube's recorded output, but this one is a tad better than the rest.

When you put up the "It's Casual" post, I was tempted to ask if this was one of those records that captured the zeitgeist of LA at one particular point in time.

Nice! very nice! anyone have old singles by DFC?

This is WAY more offensive than cotton candy. He even said, "Japs!" which is rather out-dated. I was tickled. It kind of sounds like a snack. We could start a whole line of snacks like that and call them "Rickles'"

It is funny to think back on it, but this was during the era when hip hop was considered too dangerous for youth to be exposed to. On a different note, this was Cube's finest hour in my opinion, clearing up any confusion why he left NWA.