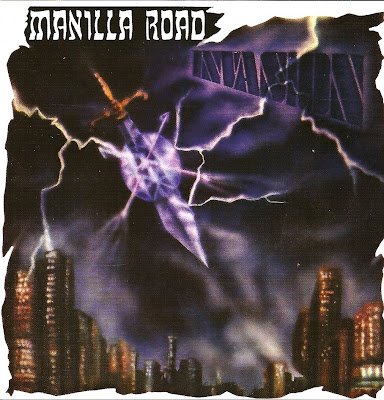 In 1980 Manilla Road self-financed and released their debut album Invasion. The full-fledged metallic approach of the band hadn't yet been realized, so this comes off a bit more like early Rush with a serious hangover. Way back when I posted their best album, 1983's Crystal Logic, I pretty much made my case as to why Manilla Road should be hailed alongside the greats of metal, so I'll stop here and let you take in one of America's truest Heavy Metal band's humble beginnings.
Here
Posted by Aesop at 12:02 AM

sorry i sent that twice weird

Ha! Great minds think alike I guess. Check it out.

I think I've given most of MR's albums a cursory listen and this one and "Metal" are the only ones I remember liking...

the other thing I noticed was there's an Armoured Angel song with a riff almost identical to the one in "Street Jammer"...

I never could get into their really early stuff as much as their Crystal Logic through Mystification period (and Out of the Abyss is pretty good as well) but this band has never really missed a step excluding Atlantis Rising which is a little boring.

Also their newest album Voyager could be their best post-reunion album. Flawless classic metal in all its glory! Absolutely worth getting.

Definitely prefer the first say 5 albums. Out Of The Abyss sounded like an attempt to cash in on the popularity of tharsh at the time, doesn't have the same sincerity as the other albums. Courts of Chaos is a pretty great later album as well, and Jake The Pope has it up on his blog today.

The 80's albums are most certainly superior, but I really love Gates of Fire as well. Maybe not a "return to form," but a great listen and still far better than most "nowadays metal."