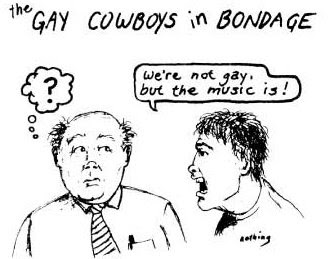 The Gay Cowboys In Bondage were one of the better known Florida punk bands. Some of you might remember their track "Domestic Battlefield" from the Flipside Vinyl Fanzine Volume 1 compilation. This tape, We're Not Gay But The Music Is, was circulated in the South Florida underground in 1983. The Gay Cowboys shared a few members with the legendary hardcore band F (Pete Moss R.I.P.). Like F, The Gay Cowboys In Bondage were typical of the Florida scene, injecting a fair amount of snarky, childish humor, and terribly nerdy in-jokes into their punk rock social commentary. Thanks to the amazing Lou Ming for bringing this back into my life 25 years later.
Here
Posted by Aesop at 12:02 AM

Are you sure about that?

I looked at Lou Ming's site. I've never heard of a damn thing on there. It'll be fun digging through all that.

I put up those three Ahisma records

Lou Ming's site, as awesome as it is, might not be very interesting to non Floridians, the guy is the best archivist the old South Florida scene could have. So many memories and Charlie fucking Pickett! I still urge everyone to take a look.

I dig the local posts. Love the Hearse for that personal touch. It's a nice kind of touching, that really gets inside me.

yeah, i'm kinda sure but that's just like, my opinion, man...

of all the Fl. stuff
how come no mention of
Nasty Savage?
yeah the singer was a bit of a goof ball meat head
but man those first 2 albums and the EP fuckin rip
classic thrash

Don't think for a second that Nasty Savage's first album won't be featured here at some point.

sweet
i mean i've had it since like forever and a day but for the uninformed i think its important to hear those riffs and oh those leads
man thats killer shit!!!

I was gonna post this soon! One of my favorite bands in high school...
way more appropriate to be posted here.