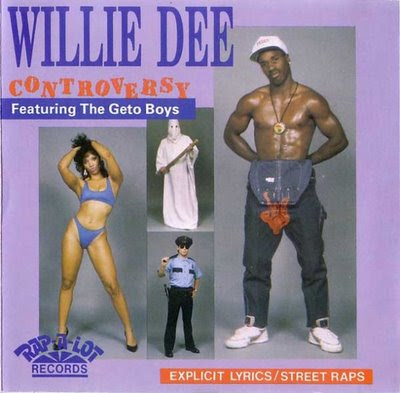 Before becoming a full-time member of The Geto Boys, Willie Dee had a fledgling solo career that spawned this album, Controversy. Many of the songs on this album feature The Geto Boys and many of the songs turned up later on their Grip It On That Other Level album. So Why, besides the puzzling cover artwork, would anyone be interested in this? Well, how about cuts like "Fuck The KKK," "I Need Some Pussy," and my personal favorite, "Bald Headed Hoes"? That's right bald headed hoes, an issue that Willie Dee feels so strongly about he states, "I'm proposin' a bill to Capitol Hill to kill all bald headed bitches at will." This is is the enigma of Willie Dee, rapper, hair lobbyist, and, at one point, professional boxer. That's right, in 1999 after leaving the Geto Boys, Willie Dee had a short career boxing under his real name of Willie Dennis. He won his first two fights by first round knockout, boxed to a four round draw in his third fight, and then was knocked out in the first round by Kevin Butts. This pretty much ended his stint in professional pugilism. Now even though Willie Dee's infamous bald-headed bill never made it to the senate floor Mr. Dee deserves our praise and respect. Oh, and don't forget to vote today.
Here
Posted by Aesop at 12:00 AM

HELL YEAH! Love this album, I have it on tape and used to blast it in the van all the time! "Bald Headed Hoes" is a total classic. Fifth Ward represent!

I always listen to Wille D when I go to Texas,this album is ok but the "Going Out Like A Soldier" album is pure angry,aggressive hip hop without the sample clearing restrictions,his later records were more mature and not as aggro as this stuff,but he still kicks ass...Mike

Gotta say, I agree with everything Willie Dee has to say, from his stance on getting your butt licked, to beating up the whole goddamn kkk. This guy was on point. Thanks for the jams!
-jburger

Oh man, I love this album. You should post the back too, where he has the big brown shitty Cadillac. There are so many great lines, like "Olivia, who has a pussy 'bout the size of Bolivia," and how he's gonna "rub whipped cream on my legs, and watch you bitches scramble for my balls like eggs," and how he lisps "I need some PUSSY, PUSSY PUSSY, PUSSY PUSSY!" and just gets louder and more deranged sounding. And how when your friend betrays you, it's called "a trip across to Mexico," and how his friend, "was a clown who used to hang around, ate up all the grub and never washed the tub." And how he will start out making a valid point about racially-based socioeconmic disparties, like, "Black kids don't have good schools or books," and then follow it up with "so suck my mothercucking dick!" Did you know he is a millionaire international real-estate agent, living in Dubai or the UAE or something now with his family? That's true, and truly bizarre. Thanks for spreading this gem.

FUCK YES !
This is one of my fave rap albums ever !

"Havin' a bald head makes ya look like a beast/
What's a matter ya never heard a grease?/
If you did you might have some up there/
Like yr pussy - you gotta give it proper care/'

How did I miss this post the first time?
The Geto Boys are excellent.

this is just great stuff. it took me a few days to get around to listening to it, but a fucking classic. if you have any of his other albums i would love to hear them.
---freakyagent666

Man I can't get enough of this old school Rough ass shit. A friend and I have a demo of some shit inspired by Willie Dee. Tere is even a song called "Pussy". If you get a chance please check it out, its on my blog. http://weedianideology.blogspot.com/2008/09/first-upload-mad-village-demos.html It will have you laughing and singing along in no time. We are working on a full length release for early 09.

God bless Willie Dee, and Scarface, and Reddy Red, and Bushwick too.

The Geto Boys were the wrongest shit you could get your hands on back in the day. At the time, it was the NSBM of hip hop. There was just something totally wrong about those guys.

There was something ESPECIALLY wrong with Willie Dee, and that's what made it so special. "Play Witcha Mama" is gleefully bereft of all taste and class as well. I can't find a good sounding upload of it anywhere, but it's worth it just for the song "Something Good"

Thanks! The neighbors will love me now.

I have often thought the Geto Boys were the Slayer of Hip Hop.

I couldn't DL this and it's making me shit my pants. Could you re-up? Also do you have the 1st Scarface solo album? Another winner.

Linked up to your blog in my review of Choice's "The Big Payback" CD. She's the rapper on Dee's "I Need Some Pussy" - y'know the one with the pussy the size of Bolivia. Wotta great album. Love the blog man - thanks for the music and inspiration!

Great Album, it actually came out after the Geto Boys first album, Im pretty sure.