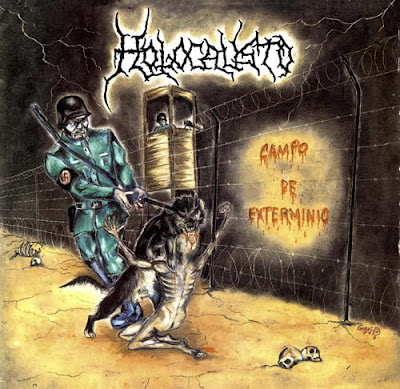 Oh, hell yeah, motherfuckers. Back when I posted the classic Warfare Noise 1 comp I mentioned that, while Sarcofago might have been the most influential of the hyperspeed Brazilian satanicunts, it was Holocausto's contribution, as well as their war-obsessed third reich schtick that I found most compelling. Their first full length LP, Campo De Extermino is a much maligned classick of chaotic blasting riffery, goofy Portuguese lyrics about warfare, and enough primal teenage shock tactics to earn it's place as your new favorite Brazilian thrash album. Adore o poder do culto brasileiro da guerra!!!
Here
Posted by Aesop at 12:00 AM

Had not even heard of these guys before yesterday, this is great, crappy production, celtic frost like chugga chugga, and so on, cheers

for me this album sits right next to Bloody Vengeance, I.N.R.I. and Schizophrenia. Classic!

A series of llama-burger belches rotated deep into your spinal nostrils while Dr. Mengele licks plaid toejam from a tapir's anus

Thanks for this! i was lookin´for am a brazilian,yeahhh your blog rocks!