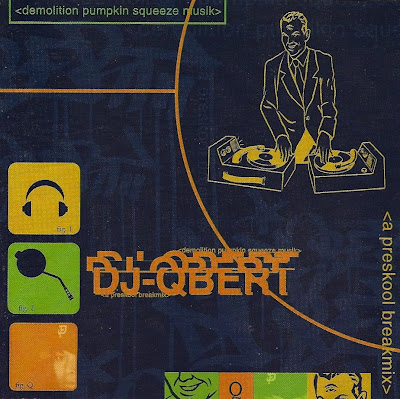 Around 1994 I was at a party here in San Francisco. The kind there were before the dot com boom. You know, one of those where a couple of hundred assholes were crammed into a Victorian. There would be a keg in the kitchen, chicks doing blow in the bathroom, some shitty band playing in the living room. Anyways, I was at this party and I was chatting with some guy about music and whatever kind of drunken small talk you have at parties and he reaches into his backpack and hands me this tape with the cryptic words "Demolition Pumpkin Squeeze" scrawled on the label. That tape sat in my bag for a week or so before I decided to check it out. When I did, I was floored. Well someone had the good sense to press this to CD (no label information is given). And now I am that guy at the party handing you that tape, only now the tape is a batch of shrunken digital files, and the party is the interweb.
Here
Posted by Aesop at 12:04 AM

Those are the best kind of parties.

Thanks for passing this on.

I posted a rip of the actual cassette a few months back here:

Thanks for all the great tunes! I only wish I had enough time to listen to everything.

I also remember those sorts of San Francisco parties...

Great intro, had to dl.

I started a blog of my own today. I added a link to both The Hearse and L.D.. Hope some people can find interest in it. Later.

Rygar, did it. Bug, I'm confused by yur comment, I am aware and a fan of your blog. Even posted a link.

those were all the best parties. someday the little thrash dudes will hopefully party like their dads. crap.
freakyagent666

I barely remember those days of old SF - is that good or bad?

an old roommate of mine had a video of this guy... i generally don't listen to djs but he was always an exception. mad talent. and plenty of answering machine fodder on this one. thanks as usual

thanks for posting this - great !

Thanks a bunch Ace! Loveit!