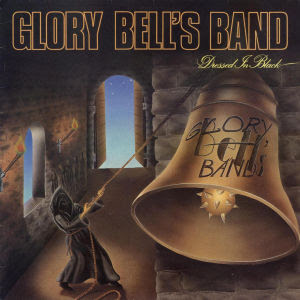 The Glory Bell's Band (later called simply Glory Bells) were another outrageously gifted Swedish Heavy Metal band you probably haven't heard of. Their debut album from 1985, Dressed In Black has had me in its power for the last few weeks. Imagine Sad Wings of Destiny-era Judas Priest meets Taken By Force-era Scorps with one of the most hyperactive falsetto voices, and you might begin to get an idea of what The Glory Bells are about. That nutter vocalist was none other than the enigmatic Glory North, who sadly passed away earlier this year. Glory was a vocal chameleon sometimes sounding a bit like Udo, sometimes Klaus Meine, but always sounding like himself, if that makes sense. Also check out the chops of drummer, Peter Udd, the guy was clearly raised on a steady diet of Mick Tucker. His skills behind the kit later landed him the gig as the first drummer of Yngwie's Rising Force. If you got a diamond cutting hard-on over the posts about Witch Cross, Gotham City, Faith, and Wizz, add Glory Bells to the list of top notch Scandi-Metal to make your bag tingle.
Här
Posted by Aesop at 12:00 AM

This is fantastic! Hard rock played with tons of passion. Almost to much passion :)

Thanks for another winner...the spikey clanger thing inside the bell on the cover is lovely. Definitely the metalest bell I've ever seen...

I surely have never heard of these guys. I probably should know but remind me who Mick Tucker is again?????

Thats right fiddlestixx you cant get a tougher bell. Oh and im only on the second song but everybody's kicking ass. Not just the drummer.

Indeed, the whole band is great, and yes, that is one kick ass evil bell.

great stuff...hard, fast and tight! I may have a new morning album.

this is fantastic. thank you, wow I'm floored.

though the vocals can be a bit too much for me from time to time,overall this is a great metal record.even my baby daughter approves.she seems to have a lot of fun while listening to this with me.thank you once again Aesop.

It is a really fun record, glad people are enjoying it.

This blog is truly a gem. By far my fave music blog.

thank you so much! this record rips!