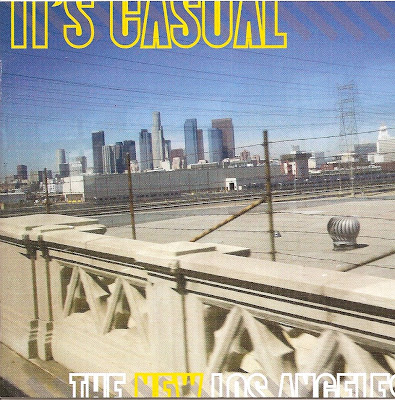 There are a few albums out there that I think really capture the zeitgeist of Los Angeles. There's X's aptly titled Los Angeles with it's gritty tales of love and death in the city of angels, there's Black Flag's My War and it's claustrophobic, dry-heat, "slowly losing it" vibe. There's the Gun Club's Fire of Love, Saccharine Trust's Paganicons, The Germs (GI) and even Motley Crue's Shout At The Devil. All of them do a fine job of conveying the lonliness, desire, passion, violence, and stifling heat of L.A. Now let's add It's Casual's album The New Los Angeles to the list. It's Casual are from L.A., and they obviously have a love/hate relationship with their hometown. This record is both an homage to, and an indictment of their sprawling, smog-choked burg. Songs about LAPD, cholo life, cars, guns, and freeways, played with a Black Flag-like hostility. It's Casual obviously dig Black Flag, but really, who doesn't? Just two dudes, a fucking staggering wall of amplification, and Los Angeles, that fucking whore, as the muse. Seriously, this will floor you like a slab of concrete to Reginald Denny's dome.
Here
Posted by Aesop at 12:00 AM

I have mp3s of the drummer's other band Jr Juggernaut's Ghost Poison album. It's Bob Mouldish alt-country type stuff. I like what I've heard of It's Casual a whole lot more.

Yes! I saw It's Casual play guerilla style in SF at the warped tour in 2002(ish). Blew me away.

What about appetite for destruction?

Oh, man. I fucking hate living in L.A., about 90% of the time. I've been here almost two years. Lately, since the hills are on fire, it's been hot as hell, and everything smells like burning plastic. Trying to skate is like trying to smoke a cigarette backwards. Fuck this shitty, shitty place. I love LA.

GnR were from LA, wrote about LA, but I don't think they ever really nailed LA. They sound like they could have come from anywhere.

thanks for posting this. I've been waiting for this day

Thank you for posting this brutal fucking record! I've got the vinyl, and have been dying for mp3s.

I've been listening to this non-stop all day!

Could you recommend anything else similar to this record?

Perhaps their other two albums?

you can get the stop listening to bad music lp from elementaryrevolt.blogspot.com this rules. party!

Really awesome record, thanks a lot for introducing me to It's Casual - I'll definitely try to hunt down the original record and their other records.

I prefer Motley Crue's Too Fast for Love over Shout at the Devil. This is like Too Fast with a lot of what I love about Botch. Thanks a lot.