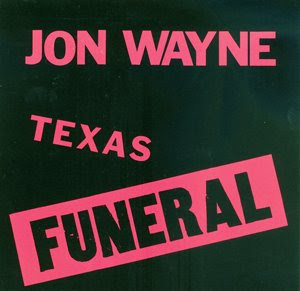 Originally released by Hybrid Records in 1985, Jon Wayne's one and only recorded output, Texas Funeral, is one of those albums that many hold very dear. Nobody is indifferent to it, they either don't know it or they gush at the mere mention of it. Folks who haven't heard it in years can still quote from its lyrics and recall their favorite bits. Though this album is charmingly lo-fi and lyrically hilarious, much of its appeal stems from how little is known about it. Rumor has it that Jon Wayne was none other than Butthole Surfers mainman Gibby Haynes. I can neither confirm or deny this, but it certainly bears all the surrealist Texan wit of the Surfers. For many of you, hearing this again will flood you with memories. To the rest of you I say, get ready to fall under the spell of Jon Wayne and Texas.
Texas
Posted by Aesop at 12:02 AM

yay it's midnight. now i can get my Cosmic fix!!!!! thanks Aesop

Actually, Jon Wayne has a second recording out called Two Graduated Jiggers that sounds like country music fused with Zappa and Surfers-esque electronic experimentation. It doesn't quite capture the feel of Texas Funeral but its worth checking out.

And thanks for putting this up! everyone should hear Jon Wayne at least once.

Had no idea about another Jon Wayne record. Thanks for the info, Nick.

If you want to hear some REAL Texas insanity, check out this band:

fantastic record. glad you're spreading it around...

thanks for putting this up!
this was a favorite of my older brother, he turned me on to it about 15 years ago but i have long since lost the cassette dub i had of it.
awesome to hear again.

The song titles definitely are reminiscent of Gibby Hane's. Where did you dig this one up????

He keeps trying to touch my mujashoo.

Holy beans, Aesop! I love this album! I've been looking for it for ages!

Cool, nice to see you commenting here, Mr. Heydt. I should have pegged you for one of the nerds who knows and loves this one. Classic.

I can always rely on you for some greatness that I missed, thanks a bunch.

Uber Thanks! Loved this record then and loving it more now! Thanks for bringing back the memories!

I've been looking for this forever!!! I can't believe this day has arrived!

Ace to see this one up here! This was the work of Californians rather than Texans. The Jimbo credited on it is Jim Goodall, later in Medicine.

Grk!, really? Hmm, didn't know that. I think at one point I worked with someone in Medicine in Oakland. I could be wrong.

YESSS! my old roommate had a copy of this but it skipped a lot. it was so good that we'd listen all the time anyway. I've been looking for this unsuccessfully since. THANK YOU!

Good thing I checked your blog cuz I was JUST about to post this classic!

I'll go back to my beer now.

so happy you posted this. my cd copy got ruined by an overzealous co-worker more than a few years ago: been missing it hard ever since. THANKS!!

This one is great! I've been giggling all the way through. Thanks again Aesop!

Sooo glad you posted this up here. Had a tape version that lasted me a good 8 years and at least two dozen mix tapes that finally bit the dust a few years back. Once again! Thanks dude. Wade has some pretty wild stories about this dude (who, unfortunately, wasn't Gibby Hanes, but really just some wild ass from Austin who called himself Jon Wayne).