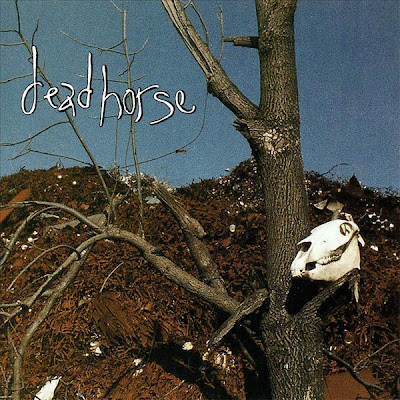 Dead Horse weren't exactly thrash, or death metal, or punk. Much like Acid Bath (a band I always considered kind of a bizarro world Dead Horse) these duders were one of those bands so unique and so inclusive of many styles, they could really only be described as horsecore. Which, incidentally, is the name of Dead Horse's first record Horsecore: An Unrelated Story That's Time Consuming. Dead Horse hailed from Houston, Texas, gained a loyal following in their home state, released some great records, and called it a day in 1996. They were so on their own trip, so special, so '90s.
Here
Posted by Aesop at 12:04 AM

Such a great band. I remember getting their "Death Rides A Dead Horse" demo at the Wild Rags store, at the time they were one of the best bands mixing hardcore and metal. And then they just kept going further and further.

sweet. i remember seeing them around 94, 95 or so. about 7 people showed up. 4 of them were myself and three friends who knew nothing about em that i dragged along with me. great fuckin band.

well goddamn. I didn't hear about this band until Relapse reissued some of their material a few years ago. This is such a great album but I had totally forgotten they even existed until I came upon this post. That album has been sitting gathering dust for awhile now, time to dig it out!

this is pretty great.
reminds me of old COC a bit, but more straight forward.
i am surprised that they do not get more recognition.
thank for the post!
-dan

i love dead horse. peaceful death and pretty flowers (purchased on a whim and a metal maniacs review) is still one of my favorite albums. thanks for this!

Like Don, Peaceful Death is one of my favorite albums, yet I have for some reason never pursued their harder to find stuff. Thanks a bunch. Criminally overlooked band.

I was a big Dead Horse fan years ago. haven't listened to it in quite some time. It has a sound that takes you to a specific time and place. Never got to catch them live.

I played the shit out of Peaceful Death when I was a wee lad, I am very interested in listening to this one. Thanks!

Weird, interesting, and more than a little bit rad! Some of the thrash parts sound like they were lifted straight out of "Reign in Blood", and I say that in a good way. The intstrumental noodling adds a nice balance, making the listener ready for some thrash!

i miss deadhorse.saw them over a dozen times in houston,still got most of my ticket stubs.ill never fall in love with a band again like i did with deadhorse.was a sad,sad day when i heard they broke up. if you've never heard of them before i urge you to check'em out.

Just got this today. Never heard of these cool guys! Cow thrash! I've always loved hc from Texas. This metal just seems to fit in so well with the offenders, the big boys etc as just feeling so quintessentially "Texan".

michael haaga is still making interesting music and you can find him on the ol' myspace. hail texas!