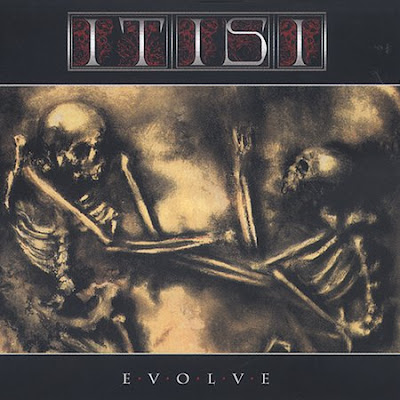 San Jose's It Is I was the post-Asbestos Death band of Tom Choi, the one Asbestos Death member who didn't go on to form Sleep. It Is I released just one album, 1995's Evolve. The record is a caustic monolith of bitter doomy sludge metal that never really got much attention. Their drummer was called "The Terrorizer" or something of that nature and played with huge dowels rather than regular drum sticks. Maybe a bit gimmicky, but it does sort of speak volumes about the band's intent to pulverize and do little more. Absolutely crushing.
Here
Posted by Aesop at 12:02 AM

I hadn't heard of this LP. It totally cranks! I may regret saying this later but I think I enjoy this more than Asbestosdeath. Thanks!

i dunno man... i got this as a promo to review for some zine when it first came out and i've revisited it a buncha times over the years... for some reason it just never clicked with me.

I've never heard of this.

I was wondering if you had a copy Your Mother, "One Big Inside Joke". Not the greatest band from San Jose, but I must have seen them a hundred times (Possibly with Hickey?). I've gone through three of 'em over the years, somehow. Thanks, Aesop.

Just the kind of hidden histories that give me wood. Big up!

crushing record.it's a pity they disappeared after this.

Where does Aseop stand on Vinnie and his playing on "Shut uP and Play yur Guitar".

I assume you mean the Zappa thing. Never a fan.

no more gimmicky than dale crover playing with his sticks backwards I guess. nice upload though.

In the words of their drummer: "this fuckin' batters, dood!" I used to see them play at dodgy clubs in SJ (the Red Light District, 7th St. Bar). "The Terrorizer" was in a short lived grind band called Bonesaw with Matt Harvey of Exhumed. I saw them open for Sleep once.

this is a total blast from the past, this was actually the first "doom" record i ever bought as a kid [cos i liked the cover and it had a huge sticker that read "doom" plastered across the cover] i totally didn't get it at the time [granted i didnt get much that wasnt either slayer or sepultura at the time] but its cool to come back to it after a bunch of years [and after doom has totally come to dominate my life] thanks a lot for the post.

moose - death of the sun

and yes, I share your sentiments as far as Zappa goes

I have listened to this album a few times since I have downloaded it and it is really growing on me. It is just so gritty.

Hi. I'm Joey from It Is I (or ITISEYE, for those who remember the original name). I played bass on this recording, wrote some riffs and a lot of lyrics, did most of the arrangements (along with Tom Choi), and shared production duties with Choi and Bart Thurber of House of Faith. Glad to see this up here; no objections whatsoever, especially considering the botched distribution and marketing we got from Dwell at the time it was released! Anyone who wants a hard copy of this can easily find one on ebay or amazon marketplace (I don't know if Dwell still presses it). Bonus: if you want to be supercool, try finding the european pressing on Hellhound with the wasp larvae on the cover (the album actually did quite well in the euro indie-metal scene).

The "intent to pulverize" comment pretty much sums it for It Is I. We played very few live shows during our short stint as a band, and the focus was always to deliver a physical assault on all present. This is what the giant dowel drumsticks were all about. Brian also used a huge marching snare and these woven nylon drum heads that would still only last him about a week of "battering". I also used a subharmonic generator for my bass rig and actually blew a friend's cigarette apart once who was standing near the stage (remember smoking in clubs?). In fact, our biggest complaint about the Evolve final product was that Dwell had messed with the mastering to make it less heavy and punchy, citing complaints of "rumbling speakers" in the mastering studio and whatnot. Anyone who has heard the original 4-song "ITISEYE: World of Sufering" tape would attest to this.

Anyway, thanks for the post and all of the comments; glad to see there is still some interest in this! Also thanks RagnarR for posting a link to yet another "Brian the Terrorizer" comic. I just love how so many people decided that this interesting individual (to say the least) needed to by rendered and preserved in comic form. As a final side note, I'm actually responsible for naming him "The Terrorizer", but that's another story...

Joey, thanks so much for the stopping by, sharing the info and above all, being in a totally great band and not being uptight about sharing the rock. I know those woven drum heads you speak of, the kevlar falams of yesteryear. Anyway, thanks again, and if you have anymore recordings of any band you are/were involved in please share.