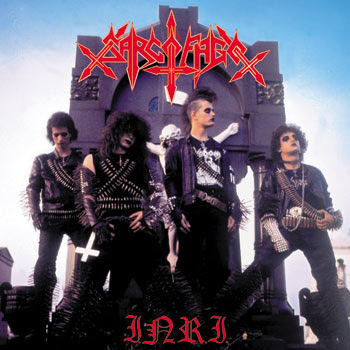 Sarcofago's debut album I.N.R.I. is as responsible for influencing the look of modern Black Metal as any Bathory or Venom. It's no secret that Sarcofago made quite an impression on a young Norwegian named Oystein Aarseth, better known as Euronymous, the founder of Norway's seminal Black Metal band Mayhem. Some believe (notwithstanding Kiss and King Diamond) that Sarcofago were the first to don the macabre corpse paint, now de rigeur among today's aspiring Satanic musicians. This Brazilian horde were also pioneers in the fine art of sheer and unfettered blasphemy. To this day, Sarcofago's disdain for organized religion is unparalleled. Boundaries were pushed musically as well. Sarcofago took the aggression of classic German Thrash acts like Sodom and Kreator and cranked the tempos. Sometimes Sarcofago seemed to playing faster than they were really able to, the result is sloppy, barbaric, and most effective. It's hard to imagine how different the landscape of extreme metal might look had this album never come to be.
Sarcofago started in 1985 when Wagner Antichrist was booted from Sepultura. Sure, he could have sat at home and felt sorry for himself but instead he called on his Christ-hating homies, Incubus, Butcher, and Leprous. Sarcofago were born and soon submitted two tracks to the Cogumelo Records Compilation Warfare Noise. 1987 saw Sarcofago releasing what would be their classic, and the subject of today's post. They went on to make four more albums before calling it quits in 2000, but none of these had the ferocity of I.N.R.I..
Here
Posted by Aesop at 12:00 AM

Haha. This woulda been my next post had I continued. Ever notice that nearly every track on "Drawing Down the Moon" is basically a variation on the "Christ's Death" riff? Regardless, this blackened grime is essential-- punks might wanna note these dudes covered Terveet Kadet on their live album.

Ahhhh, Jake, I wish you'd reconsider. Impaled Nazarene also covered TK, and even has their drummer amongst their ranks.

Funny. I had a major Sarcofago moment a couple of days ago and got really upset that I sold this to Amoeba a number of years back. I went and downloaded as many tracks off this that I could find quick enough to sate my immediate need. Thanks for now providing me with the rest of the album :)

Yes. This one of about 7 albums I have on all 3 formats (the vinyl being the awesome NWN reissue with the book.) One very hot day in SF, Ezra and I filled my bag with tapes and went out with his Fisher Price tape deck (the one shown on the Rock Jack cover.) We were walking down Market around 6th when we were playing this and some toothless meth wizard ran up and screamed "SATAAAAAAAAAN" at us, scared the living shit out of us. Then the guy walked for the next block with us, freaking us out.

That story makes me smile. You and Ezra are awesome. The toothless meth wizard, however, is not.

walking to work one morning from the 16th st and Mission BART station i was wearing a Venom shirt, and a homeless/toothless black guy jumps out from nowhere and screams "1,000 days in SODOMMMM" then wags his tongue at me.
fucking wierdo, however he didn't follow me for a block.

This is really comforting.That story about 6th and Market,I can picture it so well.That was the corner I lived at for years.I will be checking this record out in the car tomorrow.Thanks for doing this-Shannon

This album was as satisfying as taking a big juicy bite out of the body of christ!

A year late on picking this one up. But thanks for posting it. "Barbaric" is the operative term for this one. Great stuff.

olá!!!
This link here shows a story of how he got the heavy metal in Brazil ...
Very interesting, is unfortunately in Portuguese ...
More hope you have a translation in English ...

Ready To Fucky is the best metal song title ever!!!

You've probably seen it already, but Wagner Antichrist is now a college professor in Brazil. Gnarly.