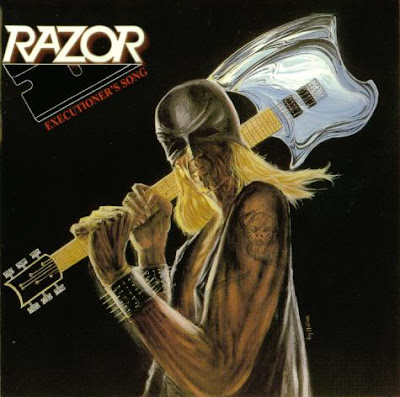 The Hearse has been around long enough that I am starting to forget what has been posted and what hasn't. I was pretty sure that I had already waxed moronic on this absolute gem of Canadian Speed Metal, but alas, nope. You may know Razor but in case you don't: these crazed canucks hailed from the very nice town of Guelph, Ontario. Guelph is situated right on the Speed River, which may explain Razor's fixation for velocity (they had songs titled "Fast and Loud," "Deathrace,"and "Speed Merchants"). The band's first studio LP, Executioner's Song may not exactly be considered fast or all that hard by today's standards, but in 1985, Razor was pretty cutting edge (pun fully intended). The track "Fast and Loud" presents Razor's mission statement, which Canadian enough, seems to be to "please the crowd" with metal fury. Later , on the track "Hot Metal," Razor remind us once again of the power of Metal, and their rightful place as leaders of the genre. Well, not sure that Razor were exactly leading the way or innovating in any way, but fuck me if Executioner's Song isn't a damn great metal album , completely devoid of fluff or filler. Play this loud at your next party.
Here
Posted by Aesop at 12:06 AM

I Admit It's Faster Than I Thought. And It's Great From Begining To End. Thanks For Another Underground Metal Classic!!!

Thanks for this. I love Razor. "Shotgun Justice" is one of the most ridiculous albums ever made. Not too familiar with this one, but I'm sure I will be soon...

Dope! Thanks, I used to have Evil Invaders, but have since lost it soemwhere along the way... thank you for posting this band!

My thoughts exactly. Love the cheesy cover in all its cheesiness too.

I remember my friend had this cassette tape...I always dug the cover....shit I was 10 when it came out. Let's hear it for older brothers/sisters/dads/moms/friends/etc....that still have record collections for youngins' to run through and pick out the ones with the killer covers(even if they are cheezy/when you get older.). Remember staring at album covers for hours,trying to recreate them?...oh no...,well piss off . thanks.

One of Canada's best! Thanks for posting!

This is great drinking metal, along with Tank's Filth Hounds Of Hades. It makes me wanna pound some strong stouts and punch yuppies in the face, like that night when you bitchslapped that yuppie at the dinner party. Cheers!

Excellent post Aesop. This is definitely the nexus of Razor's speed metal era, kicking up those classics from the s/t ep a good 10-20 bpm!

My fave's always been their second record. Please check out my blog to see what I say about it: http://jesustrashcan.blogspot.com/2011/06/canadian-metal-classics-pt-1.html

Also, excellent connection between Speed River and Speed Metal - never thought of it! Keep it up

Enjoying the piss outta this album at the moment. The cover looks familiar...

Much thanks for all the awesome music, Aesop. The Hearse has fast become a regular stop for me. You're the man.

this fucking shreds!
i come here specifically for the classic metal posts, and you never fail to amaze, mon fre. past, present & future thank yooz.

Obvious rip off cover art of Iron Maiden's "Killers". Why has no one mentioned this?