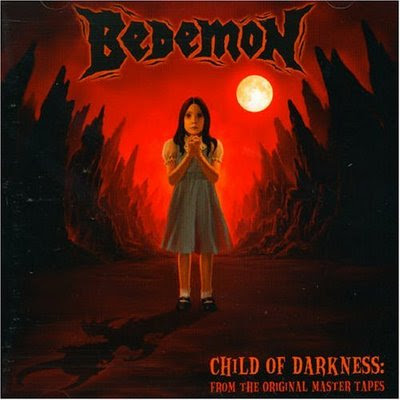 People erroneously refer to Bedemon as a side project of the godly Pentagram, but the truth is Bedemon was the brainchild of Randy Palmer and former Pentagram drummer, Geoff O'Keefe, and was a serious full-time entity of its own. A number of badly recorded demos were produced. When Bedemon found themselves without a proper singer, Randy invited Pentagram frontman Bobby Leibling to add his inimitable stylings to these basement recordings. Pretty easy to understand why Bedemon might be labeled a Pentagram side project-- the two bands share a similar sound and aesthetic. Both bands held acts like Black Sabbath, Blue Cheer and Mountain in the highest regard, but still managed to eke out something entirely their own. After Randy Palmer's untimely death in an auto accident in 2002, the bulk of Bedemon's recorded output was reissued in tribute by Black Widow records. Most of this is extremely lo-fi and muddy but the genius of Randy Palmer shines through the muck, and as you may know, anything Bobby Leibling touches is gold. The art was done by Wes Benscotter using some rough sketches found in Randy Palmer's belongings after his death. I really suggest picking this up for the extensive liner notes and photos, it is worth whatever you pay. This one's for you, Palm.
Here
Posted by Aesop at 12:10 AM

This is such a gift to remember him by.

This is really good. I don't have a ton of pentagram releases to compare too, but it sounds like a more sabbathy/sleep-esque pentagram, im into it.

bedemon is the SHIT. thanx for posting this, as someone stole all my metal cds.

Back in the early 00s someone who had won an eBay auction from me (a boot St. Vitus shirt) sent me a tape of Bedemon/Pentagram material stretching back to '68 on out to the mid 80s. Some of it I think was released semi-officially on the two infamous Peace Records boot LPs. I recognize some of the recording from that tape on this CD, though my tape is actually of much better quality. Still got it somewhere...maybe I should set up some stuff and rip it for you...

Pentagram is playing Chicago June 27...five hours away and probably going by myself (who cares)...yeah, I think I'm going to try to check it.