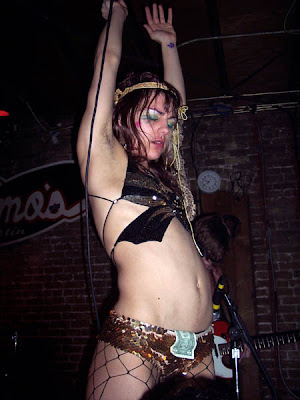 Veronica Lipgloss & The Evil Eyes was a great, but sadly short-lived band from San Francisco. Obviously influenced by Siouxsie and the Banshees and X-Ray Spex, the band also seemed to be fueled on the works of The Birthday Party and the The Pixies. The Witch's Dagger from 2005 was the band's first and last album, and it's an engaging stew of gothic punk no wave darkness from start to finish.
Here
Posted by Aesop at 5:55 AM

Wow, great blog I have stumbled upon here. I like Veronica Lipgloss (and The Skabs, Lost Sounds and 45 Grave, who I all see as sorta similar).

I played them on my "Evil Women from the Garage" episode of a podcast I do, Radio Schizo. (A big Peni fan I am, too.)

That show is here:

Anyway, your blog is great. I'm adding you to Cultpunk's blogroll!

I added your link as well, thanks for the kind words.

this is a great album, listened to it driving home from work today.

Great choice of words in the little blurb you wrote too with an "engaging stew". I wish I could fit that phrase into everyday conversation more readily :-)

I remember seeing them one time, and they had some great chorus, something along the lines of "suck my sores",etc.

It was kind of like they stole a song out of my head.

what a great record!!!!
thank you..jc

I had never heard of this band, so I will chek them out, thank you for the tip!
Ah, and she looks damn hot! In an 'unshaven armpits' sort of way...

This sounds like its right up my alley. The one full of broken glass and rotting wood.

Really looking forward to listen to this.

Ha,ha I worked that there show(Emo's sign in back)...I found a Veronica lipgloss CD at the Austin library as well as a GG Cd....what the f'.