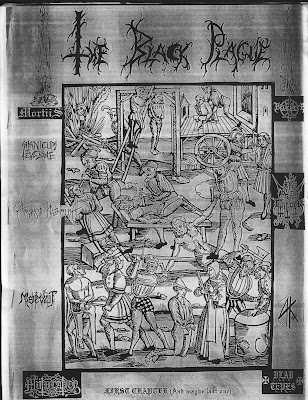 For part three of Cosmic Hearse's homage to Les Legions Noire, I've decided to do something different by uploading scans of the Black Plague fanzine, no music today. Black Plague was the official voice of the reclusive LLN and you won't see interviews with some of these bands anywhere else. Featured within the pages of this infernal tome is Vlad Tepes, Mutiilation, Belketre, Black Murder and more. Don't worry it's in English, but should probably be read by candlelight. Read up, I'll be back with more music tomorrow.
Here
Posted by Aesop at 12:01 AM

thats some serious commitment to the blog dude, scanning and uploading, must have takin a while
your DEADication is greatly appreciated

Actually, these scans have been floating around the internet. I don't actually own one of these zines, it's extremely rare.

dudes, you don't even know what TIME it is yo.

Up for months now and we're all scanning zines and let me tell yous it aint hard work at all, takes about 15-20 for a zine which is nothing.

Slobo, you don't need to tell me, I been enjoying Punks Is Hippies since the beginning, never saw the LLN zine there though. You should post some old issues of "Fall To Your Knees Pissing", best zine ever!

Ha ha ha, yeah I kinda of thought so, mind if I make a quick post pointing here for the zine you posted?

That zine you mentions sure got a cool name. Because too, we all know its about having a cool name...which kind of explains why I am so crap at zines - I keep changing names. My current zine is called "Distort Hackney", but first I was thinking "Reprise (Why?)" -you know, a Discharge ref right there- but now I am tempted to change it again...lol

This is choice! I kind of love how all the interviews say the same thing...must be great not to have to deal with humans anymore!

I am just now learning about Les Legions Noire, mainly through listening to Mutiilation's "Sorrow Galaxies." Any recommendations as to the best of the bunch?