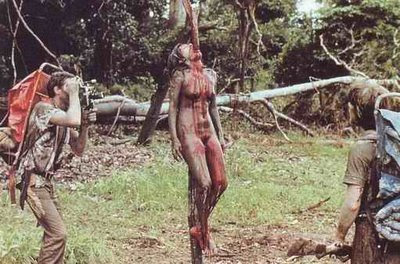 Like any one who has seen it, I have a love/hate relationship with Ruggero Deodato's exploitation film Cannibal Holocaust. Yeah, it's unecessarily brutal, it's mean-spirited, it's despicable, it's poorly acted, it's racist, and it's cruel to the little critters, but most importantly it's mesmerizing in it's sheer ugliness. Love it or hate it, no movie has ever been more polarizing, making it an important part of film history, whether you fucking like it or not. Riz Ortolani's amazing soundtrack still fills me with the same kind of dread it did when I first saw the movie back in the '80s. Here it is to give you the willies.
Here
Posted by Aesop at 12:03 AM

Still sends chills down my spine - particularly "Adulteress' punishment". Thanks for posting this, great blog!

This soundtrack has always been one of my faves. Thanks for posting it and thanks for maintaining a truly amazing blog.

Pyoo pyoo go the syndrums. I love this movie, have screened it in clubs and bars a few times. Even a couple of girls like it.

I actually love this movie. I met Ruggero Deodato and he was a really sweet and nice guy. He loves his fans.