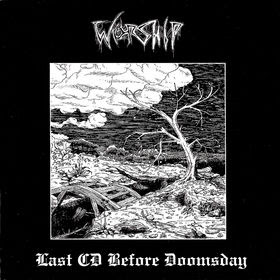 Worship are a painfully slow and crushing doom band from Munich. This was released as a demo titled The Last Tape Before Doomsday in 1999 and was later released with extra tracks as The Last LP Before Doomsday and The Last CD Before Doomsday. This isn't doom in the Pentagram/Sabbath vein, this is deconstructed molasses drone funeral dooooooooom. Bleak and unrelenting, Worship absolutely exudes misery and desperation in these five dirges, the point is driven home further by the fact that drummer/vocalist, Mad Max, took his own life while vacationing in Quebec in 2001. His parents, convinced that this depressing music must have contributed to their son's undoing, subsequently destroyed his record collection and personal affects. The band reformed in 2004 to further honor Max's vision and memory. Best song title ever: Keep On Selling Cocaine To Angels. Indeed.
Here
Posted by Aesop at 12:04 AM

wow, i am definatly hunting this down,

They're doing a new pressing of "Last cd Before Doomsday" on Weird Truth Productions from Japan this summer. The new one, Dooom, is also great and still available.

I got the "Keep on Selling Cocaine to Angels" split w/ grind gods Agathocles when it came out, apparently most of them were destroyed by fire(or by Mad Max's parents)...supposedly there is only 80 left...I'm a lucky girl!

Indeed you are. Weird Truth put out the cd I own.

Hell yeah i got their tape the lp and the split 10 inch with sabbat master-- fucking imense and heavy.

Yes that is deffinetly the best song title ever!!!!