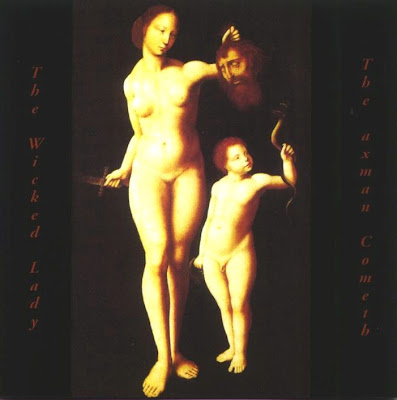 The Wicked Lady story is one of amphetamines, motorcycles, violence, despair and a wah-wah pedal. Formed in 1968 by Hell's Angels members, Martin Weaver and "Mad" Dick Smith, Wicked Lady cut their crooked teeth playing their brand of heavy psych in smoke-filled biker clubhouses and greasy English pubs. Rumor has it that Martin Weaver was approached by an A&R guy from EMI about signing Wicked Lady, Weaver's response was to beat said A&R guy to a bloody pulp. The Wicked Lady wasn't fucking around. The band's gigs were equally violent, and it was not uncommon for sets to end with "Mad" Dick hurling his drum kit into the audience. But for all this spectacle and barbaric rage, was the music any good? Nope. It was spirited, lo-fi, caveman proto-doom-metal slop, but undeniably anguished and so very fucking real. In a way, Wicked Lady were the Saint Vitus of their time, a brutally real flesh and bone dirtbag band that might have been better if forces like addiction and jail time hadn't impeded their path. Wicked Lady's material is a downer. The lyrics are about war, mental illness, being a rebel, and THE wicked lady, who will apparently "take your soul away." Dark stuff that, like Sabbath, was a far cry from the hippy love insipidness that prevailed at the time. They seem barely able to play their instruments. You can tell that Weaver and company were drunk when they finally got around in 1972 to recording this collection of songs on a stolen 2-track machine. The results are primitive, depressing, and dark, and I think you will agree, absolutely amazing.
Here
Posted by Aesop at 12:01 AM

I'm going to ditto the anonymous guy above. This is fucking awesome. I'm especially digging the instrumental 2nd track and Run The Night. Do you get the feeling that Witchcraft spent almost as much time listening to this as they did Pentagram?

Shit! After last nites introduction im fucking hooked. thanks for posting this these guys are fucking amazing!

i cant believe i hadn't picked up on this sooner, this is fucking one of the best bands i've heard from that era ever!

are you aware there is another Wicked lady CD - Psychotic Overkill? recorded in 1972. One of those werd items that turned up in the used shop I used to work in occasionally. More of the same i think...been years since I played it.

hmm.... for those of you who wish more Wicked Lady, Psychotic Overkill is here.

Crushed Butler is well worth the bother too.

Both the album you posted and 'Psychotic Overkill' are must-hear underground metal releases.
Thanks aesop

They can't play? They can play. Some of the best rock guitar I've heard man

Aesop, great blog! Keep it up. Thanks for this gem, the guitar work is quite simply amazing, check out the Dark - Round The Edges LP if you have not already done so, it is legendarily rare in its original form, about 60 copies in total but it is great stuff, the ever reliable Akarma reissued it about 10 years ago, check it out! Also, apologies if this is not news to you!

your blog rules! Is there anyway you can send me those wicked lady recording or know of another link.