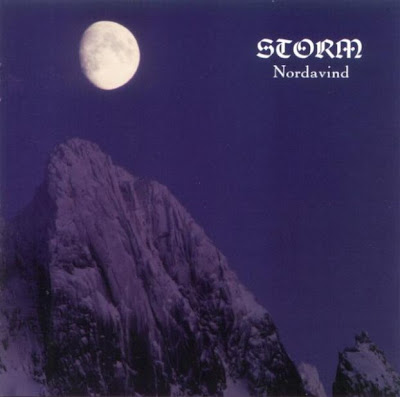 I am told that this classic is out of print so I guess it is suitable for posting here. If you didn't already know, Storm was the one-off union of Satyr Wongraven (Satyricon), Fenris (Darkthrone, Isengard) and Kari Rueslatten (The 3rd and the Mortal), who came together in 1995 to play metallic versions of some Norwegian folk standards. The end result sounds like a more refined Isengard due partly to the skaldic vocals of Fenris. Apparently the nationalist slant to the album came back to bite Ms. Rueslatten in the ass when she attempted to shed her metal past and make it as a mainstream Norwegian pop star. She back-pedaled like a wounded doe drowning in the icy fjord of her own ignorance, claiming to not have understood the very lyrics she sang on Nordavind and vehemently stating that she was unaware of the anti-christian themes in the songs, whatever. If you end up playing this for your non-metal-loving friend, prepare to hear one of them make a crack about the old Swedish Chef character from The Muppet Show. This would be as good a time as any to cleave them with your well-worn battle axe, and let their inferior blood stain the snow of your fatherland. Your friends are assholes, and aren't fit to be galley slaves in Storm's dragon-prowed longboat of old. If you can't enjoy Nordavind you are already dead, and Valhalla is lost to you.
Dataoverføre den her over
Posted by Aesop at 12:34 AM

This album is really sweet, thanks for sharing. You have the best blog, hands down.

Awesome album! I wish there was more Storm in this world. No other folk/metal band I've ever heard comes close.

fucking epic post! i didn't know this even existed. i am a bad black metal fan.

Thanks for posting dude, just new to your blog but had my eyes open for years for this. you have made my day!

Been looking for this for a long time! Thank you!