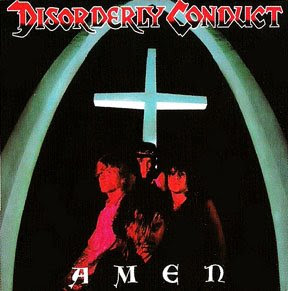 Disorderly Conduct was a mainstary of Florida hardcore in the 1980s and Amen is the band's only full length recording. Most notably, Disorderly Conduct was fronted by a young Casey Chaos, who now leads the corny Hot Topic rage rock band, Amen (apparently Mr. Chaos' favorite word.) Also amongst Disorderly Conduct's ranks was Ken Decter of the band F. While not as raging as F, Disorderly Conduct was not without merit. Amen is a good (not great) album of snarling metallic hardcore, even if it contains a few lame numbers, mainly Groove Thang and Nightmare. Rumors surfaced that Disorderly Conduct was a christian band (as evidenced by the big cross on the cover) but this was never confirmed or denied, and really, who gives a fuck. The lyrics are the standard "You were my bro, and then you fucked me over" personal politics that was favored by bands like Minor Threat and 7 Seconds. This was ripped from the vinyl I bought in 1986, I was in the 10th grade.
Here
Posted by Aesop at 12:03 AM

Wow...never thought I'd hear this again.Awesome!
Now this is rare...I've never seen it anywhere.
Thanks Aesop!!

mr. chaos also played bass in the early 90s reunion of one of our shared faves,the "only theatre of pain" era Christian Death..

That is wild! You could get killed by a meteorite tomorrow, and you're spending the time upping albums you don't even like? That is some new shit!

Also when i get back to america we need to start a full-on PVC vynyl-clad, giant-wig-havin' candelabra-festooned gothic ZZ TOP cover band:
ZZ TOD.

It's not that I don't like it or that I don't while away the hours thinking of impending doom in the form of a giant space rock careening towards Earth. It's an enjoyable record, but probably here because of it's rareness rather than it's greatness. I grew up in Florida, and all Florida hardcore records hold a special sentimentality for me regardless of their actual merit. I have been meaning to post another rare Florida HC vinyl, Amazing Grace's "Entities" lp, but I can't find a damn thing good to say about them.

GREAT BAND-THANK YOU FOR THIS CLASSIC LP. AMEN WERE RECENTLY ON THE HENRY ROLLINS SHOW + ROLLINS PRAISED CASEY AS HAVE IGGY POP WHO HE WORKED WITH AND GAVE IGGY ON BBC TV A LIFETIME ACHIVE MEANT AWARD AND WAS EVEN INTERVIEWED WITH HIM IN MILLIONS OF THINGS {that interviews on youtube as well)
On Top Of That: CHAOS EVEN SANG WITH RAT SCABIES AND BRIAN JAMES AT THE 100 CLUB FOR THE DAMNED'S 30th YEAR ANNIVERSARY GIG WHICH I WENT TO AT THE 100 CLUB IN LONDON + IT WAS TRULY AMAZING.I DIDNT KNOW WHAT TO EXPECT BUT IT WAS INSPIRING AND A SHOW I WILL NEVER FORGET .CHECK ALL THIS OUT ON YOUTUBE.COM AND SEE FOR YOURSELF .WHAT ROLLINS+IGGY SAY ABOUT CHAOS I BELIEVE IS A PRETTY RELIABLE SOURCE ,
. MAN EVEN TV SMITH AND GAYE ADVERT (from The ADVERTS) RECORDED WITH HIM ON THE BBC RADIO!
On Top Of That, THE BIG GUY EVEN MADE AN ALBUM WITH THE GUYS FROM TURBONEGRO ,EMPEROR +DARKTHRONE.THE BAND IS CALLED SCUM. AND CHECK THAT OUT ON YOU TUBE OR @ WWW.SCUMBAND.COM.
-WHO ELSE IN THE SHIT WORLD OF POPULAR MUSIC CAN YOU SAY HAS DONE ALL THAT !Thanks Again For The Album!

Thanks for the comment, Mr. Chaos, but why the caps, I feel like you're yelling at me.

AMEN are one of the most intense live bands around these days.

Great post! Disorderly Conduct are one of the best bands to come out of Florida, I actually saw a post on punknotprofit.blogspot.com , they put up the full LP plus extra tracks! Amazing... As far as Casey's following band, Amen, how you can compare it to Hot Topic and call it corny is unbelievable to me. It's the complete opposite! You should really do some research before making such a statement, they're one of the most original, undefinable and passionate bands out there. I mean, Casey just sang for The Damned for their 30th anniversary show and was asked by Henry Rollins to be on his TV show, you really think they'd want to be associated with a "corny Hot Topic rage rock band."? Absurd. But thanks for the great post nonetheless!


(here's some sites for those of you who have mind enough to do research before forming an opinion: www.officialcaseychaos.com and dieorfollow.com/_brigade )

Either you are Casey Chaos or you are fucking him. Your rabid and persistent ball-washing is just too fucking weird, even for Cosmic Hearse. I wish I had a prize to give out. My blog, my opinion.

Great To See Your Blog I Really Love It And This Band As Well. Thank You For This Ace Album. Butterflies and Gin For All Cheerio!!!!!

Huzzah - I've been wanting to hear this for ages. And, come on, AMEN are pretty good... nay, awesome.

WOW!! I Heard about this for a long time , Great Post !! even for for the curious that never knew about ths album.Do you have any of DC's other demos,live shows ect??
Much worship if you do.still if not,
I'm really Greatful for the album and your site!
CHEERS MATE!

To be honest this band was NOT a mainstay of Florida hardcore, yes i was there, in fact they were somewhat outcasts and most people didn't like Casey at all, i also think that there was elements of jealousy of him as well, in the 80's Casey lived in Melbourne Florida and it was just a little more than a mid sized town.. Disorderly Conduct did play out live and i think they are worth noting Florida in HC history , I have this LP too, if i remember I think there is some (maybe allot) of drum machine on it, if i remember the story mostly so they could finish it and get it out, and if you look at the back of the LP live pic of band the drummer's face has been airbrushed over,... They were on a comp cassette tape out of south FL and a flipside comp too.

I was there too and remember them playing many a show at Flynn's. I understand that people weren't crazy about these dudes but I always enjoyed them and found them to be good dudes. The version I own has Bill Irwin's face in plain view. Not trying to be contradictory but I am speaking from experience. I grew up in Ft. Lauderdale and attended punk shows in South Florida from 1983 until 1988 when I moved to SF. The tape comp you speak of was Rick Lenniks Florida Explosion tape that had some great punk bands arbitrarily mixed in with some really awful coke metal bands.

Oh i hear you, im not trying to be argumentative at all, perhaps that was more of a central Fla thing and im mostly talking about what other people thought ,.. and it was mostly about Casey, not the other people in the band, but that was Caseys band for sure tho....

Whenever I saw them live i can say, yes they hit the marks, Casey worked hard as a front man and he worked hard on his band, he was thinking and doing crossover ahead of its time.. looking back i can see that they were more "pro" than some of the other Florida punk/HC bands, old punk rock fla was really crazy and so were the Fla bands. I have to give him props for getting where he is now, Dick or not he got pretty far.

I think i was talking about the live pic on the back that drummers face being air brushed, but i could be totally wrong,..

Oh and Flynn's was the bomb, it was kind of a far travel but i did make a few shows,.. you should write about that place sometime,.. Thanks for the reminder on that that Florida Explosion tape,.. mine was red,.. it doesnt hold a candle to the "We cant help were from florida" 7,.. I have that Amazing Grace, How about some No Fraud from um Sarasota?, those guys were really cool that first demo tape really surprised people, they put out a 12 . I wish i had some Pagan Faith (not sure if they even put anything out,) ... and that first Roach Motel 7,...