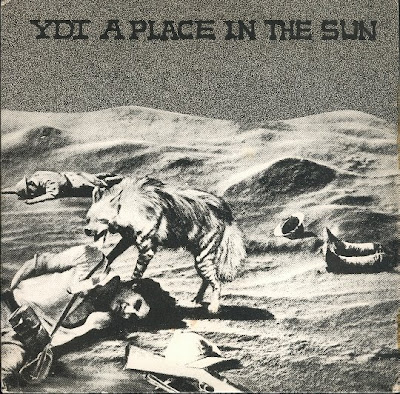 Look, if you are anything like me you like your hardcore angry and primitive and NOT performed by malnourished pretty boys with sideways myspace haircuts. You probably want it to be about war and destruction and not about being blown off by some teenage mall skank that let you finger bang her after prom, hell, in my day punkers avoided prom like an AIDS-filled piñata. Well, lucky for you there was YDI (pronounced Why Die?), perhaps (along with Negative Approach and The Fix) one of the most brutally pissed off hardcore bands of all time. YDI hailed from Philadelphia, the City of Brotherly Love, and go figure...their singer, Jackal, was a brother brimming with hate and an insatiable appetite for choice blotter acid. Nowadays the punk scene is a haven for PC touchy-feely goodness, but in the '80s being Black and punk was tough and you had to be tough to get by, just ask The Bad Brains. YDI had two Black members and perhaps this is why, to this day, their rage and hostility is unequalled. YDI scared even punks. If you've seen Paul Rachman and Steven Blush's amazing doc American Hardcore then you'll remember YDI as being the very essence of raw primal animosity, with Jackal's arms flailing in a whirlwind of ebony fury. In 1983 YDI unleashed their very first recorded statement in the form of a seven inch ep titled A Place In The Sun and it is a classic. So forget what passes for hardcore these days, it's just rehashed At The Gates worship with about as much edge as a Paul Mitchell hair salon, forget romance, forget eyeliner, forget bands with names longer than three fucking letters, forget the prom queen, forget your facebook page and remember, always fucking remember YDI.
Here
Posted by Aesop at 12:48 AM

this is one of my favorites - this EP is a total classic and too often overlooked. very underrated shit. plus nothing beats the brutal truth cover of I Killed My Family.

thanks for introducing me to the american hardcore documentary! i just watched it twice. I've always hated the Minutemen but Mike Watt's commentary in that movie just blew everyone else's comments away. Plus watching dudes from Adolescents and Pantera try to assemble words into sentences was a hoot.

hey mate, thanx for this, yep, this is what i remember as US HC ;)

I've been spinning this one all week.

My favorite 7" EP ever...my friends and I once gave Jackal a ride home (or somewhere) to North Philly after a show and it was all narrow rubble strewn streets shadows no street lights and even an upturned car. Our suburban white kid asses were suitably fucking scared shitless.

The first song "Not Shit" just grabbed me by the throat. The rest of the ep doesn't let go, either. Thank you so much for posting this fucking amazing music. Love your blog- your reviews and personal stories make it special.

everytime i come across mention of YDI i flash on a house wrecking party in philly somewhere off of south street, musta been '85. you guys talk about frightening videos or angry tracks, try a darkened house of people outta their gourds on acid while YDI is destroying a sound system and Jackyl's swinging a baseball bat destroying walls in a little room a couple of feet from you. very fucking heavy

gotta love the cover art- a hyena about to munch on a heatstroke stricken explorer. also, probably the only band that could make a Jetsons reference sound so angry (the song 1983)...classic