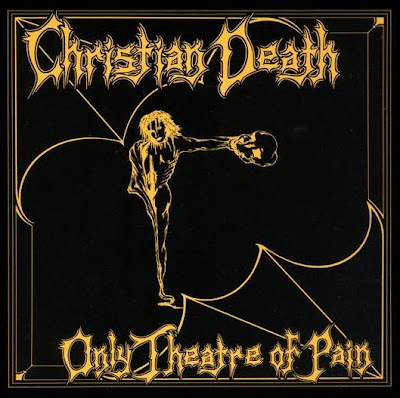 My first exposure to Christian Death was the 1983 book Hardcore California by Peter Belsito and Bob Davis. The images of Christian Death members Rozz Williams and Shron performing live (both photos by Ed Colver) are indelibly marked on my psyche. Rozz is dressed in black, holding a crucifix, various bells and skull trinkets hang around his neck. Shron appears to be in the process of nailing a dead cat to a another crucifix, the hammer visible in the photo. Both men are rather androgynous in appearance. These two photos seemed so wrong to my fourteen year-old mind, and the idea of actually listening to such a band felt so taboo. I needed to have this album. I grew up in suburban South Florida, not exactly the oppressive bible belt, but not LA or New York either. I took a long sweaty bus ride from my burb to Open Books and Records in North Miami to buy the record. The bus ride home was considerably less grueling as I sat staring at the cover, in eager anticipation of what the album might sound like. At the risk of sounding like a crotchety old geezer I must say kids today don't understand this kind of build up, this raw excitement. Most of them have already heard the music and have been bombarded with images of the artists long before they download them from iTunes. Nowadays the time between when I become interested in hearing something and actually hearing it is never any longer than preparing a sandwich or finding my keys. Not that I miss long bus rides and the occasional shitty album bought because the cover was cool (fuck you, Exploited) but I believe that having such experiences is why music is sacrosanct to me today and still the source of much excitement, long after everything else seems boring, futile, and cheap. Upon getting the album home, and dropping the stylus on the vinyl, I almost wept. Christian Death seemed more mysterious, and more forbidden even after hearing them. I felt like I was a member of some secret club, as if I was in on some great universal truth generally unknown by the lesser beings who constantly stood between me and my hapiness, I was a sullen teen, and Christian Death were a sullen band. As clichéd as it may sound, I felt as if Christian Death existed only for me as a tangible manifestation of my confusion, my frustration and my typically adolescent angst. Of course later I learned this was simply not true, many people had bought and enjoyed this album, they pressed quite a few of them. Not one iota of Only Theatre of Pain's appeal has been lessened by time, this album still fills my head with grainy sepia toned images of crucified animals, matricide, swastikas, and other unsavory things. Rozz Williams remains one of my favorite lyricists. His gift for stream of consciousness prose and vivid imagery was unparalleled. His lyrics ranged from the uncomfortable to the stirringly beautiful and romantic, all the while presenting himself as a degenerate poet with a firm resolve to end his suffering once and for all. And as I listened more and more, he became less of a scary gender bending demon and more of a human, an extremely hurt and vulnerable one at that. The rare sort of genius that can never last. I even at times worried about his well-being though I never met the man. On April Fool's Day 1998 I heard that Rozz Williams had hung himself. I wished it was a joke, but it wasn't.
Here
Posted by Aesop at 12:06 AM

Great write-up on a great album. I bought the French edition which had snippets of 'Chants of Maldoror' to add even more mystique.
Some years ago someone played it and thought it would sound way heavier/darker than he thought. I told him this album was a shock when it came out. You should see things in perspective with all the 'heavy' music coming out these days.

great story!
being from the middle of nowhere midwest area i, as well, had to travel hundreds of miles to collect the albums i so desired or see the punk show or, heck, even to buy those doc martin boots. definitely made all those things more important and respected.
-corn

This album shocked and fascinated me when I first heard it. A friend of a friend brought the cassette over. I'd never heard of the band, but the name fascinated me. When I heard the music and the lyrics, I got goosebumps. This was the weirdest, most Satanic music I'd ever heard (that's the impression it made on my 15 year old self). This album was up there with Seven Churches for me. Both albums sounded like they were recorded by members of an evil cult and only released to the public by accident.

I totally agree with your bus ride story. Several times I have had similar experiences as well.

As far as Christian Death goes, my favorite was their cut on the wonderful Hell Comes to Your House compilation. That has to have been one of my fav, and best albums from back then. The tune, named Dogs, has an awesome sound, very eerie and evil sounding.

Oh man, I love this album, too. My sullen teen self first discovered them around 1996, too shortly before his death. It was a used copy of the Skeleton Kiss E.P. that I found at an indie record shop. Only Theatre of Pain came soon after. The whole album is great, but I think I must have played Romeo's Distress about a billion times sitting in my room. Thanks, really enjoy your blog.

ohhhh shiiiiitt!! Aesop's on the internet running things!! I found out about Cosmic Hearse from the Punk Not Profit blog, which i found out about from Kevin from C.O.P. -- the '80s Japanese HC band. He told me about it at their 20 year reunion show (long story). Anyway as always your taste is impeccable and your comments set your blog apart from all the rest of the mp3 blogs out there.
BTW - since you're from S.F., check this out:
http://www.hellodamage.com/street/
it's drawings i did of Market Street's ongoing fashion show.

And here I thought I was the only one who thought the Exploited sucked. For awhile, as a teen, I thought there was something I just didnt get, some aesthetic that was over my head, something Scottish. Then one day I realized...they just fuckin sucked.

No, Kombat. You are not alone, The Exploited were atonal, undynamic, thoroughly pedestrian and boneheaded tripe.

Did i ever tell you that i did GHB with Rozz? Truly interesting experience hanging out in his apt. in Oakland a couple of years before his death. I had been friends with a couple of his old lovers/band mates from Premature Ejaculations since 1989. Their intensity was empowering.
R.I.P. Rozz

No you never told me, do we know one another? Wow, never knew he lived in Oakland, but the GHB thing makes sense. I would have given my left arm to pick his brain, so so many questions I have.

wow..one of my favorite ever albums. i think anyone who truly loves this album has had some sort of experience like that with it. i remember the first time i ever heard the name,there was this dude at tracy high named dave something that had a leather jacket that had a bigass picture of-get this-Leatherwolf (who i later went on to find sucked hairy dogs balls) and at the bottom there was the coolest thing ever,the Christian Death logo..what a name,i thought and i ordered the record. it opened me up to so much rad music and was so decadent and sinister without being tough or stupid. i love it to this day..

and i agree,the exploited were lame o thick neck dreck.

As a Midwestern Christian teen dating an atheist goth boy, this album tapped into the contradictions of my existence at the time. It was compelling, dangerous, uncomfortable, like the dark sexy edges of the world that I was just starting to be aware of. Listening to this album again still gives me a bit of that sinister shiver.

Well stated, Nina. It's interesting to hear what an impact this one record made on kids all over the country. Although the stories carry a common chord, one of teen angst, longing and the giddy rush of the forbidden. I have my own experiences with it, but hearing others, I feel as if I never truly understood it's weight. Could "Only Theater of Pain" be the most important and influential record of the 1980s? Maybe.

I think the reason that im such a Ludicra nut is that some a the songs gimme the same cold wave feeling as this album does,that hopeless dopeness doesnt get any better kinda thing...

Wow, Bob, that's a high compliment. I never really thought that Ludicra and Christian Detah even existed in the same universe but I know this album is probably one of the few that everyone in Ludicra holds in regard, so maybe it is a more subtle and unconscious influence.

The perfect album. I love it so much. Will go listen to it now.