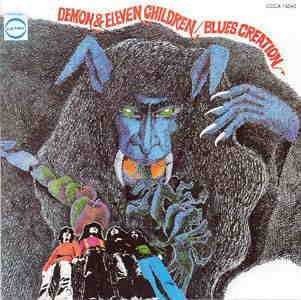 Blues Creation, Japan's premier purveyors of heavy blue-based psychedelia released Demon & Eleven Children in 1971, it was their second album. Their first is a subpar collection of American Blues covers, but with Demon... the band started writing their own songs in the style of Cream, Mountain and Blue Cheer. Blues Creation was lead by guitarist Kazuo Takeda who used a revolving door of musicians. After a brief stay in London in 1972 Kazuo returned to Japan and shortened the name to Creation. They continued to make albums into the '80s but it is really Demon & Eleven Children that most interests me, especially the epic title track. I must confess, part of this album's novelty charm is hearing a Japanese band performing a song titled Mississippi Mountain Blues, but that aside, it's a pretty ass-kicking piece of fuzzed out eastern psych.
Here
Posted by Aesop at 12:51 AM

A great album! Their best material by far! Didn't care much for the stuff with Carmen Maki.

Demon & Eleven Children is so much better than the first album...it's actually one of my favorite albums around...I can never get enough Brane Baster.