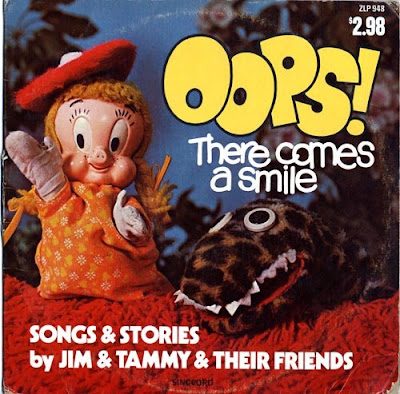 Would you believe there are people in this world who think the universe was created by a single being, and this single being had a son with an Earth woman who grew up and could do things like turn bread into fish and walk on water? Would you double over with laughter if I told you they actually believe this son was killed and stuffed into a cave, but a few days later he rose from the dead and danced around? They also believe that by simply stating your love for this special man that all past transgressions are null and void, and you will get to spend eternity in a magical kingdom in the sky. Pretty nuts, huh? Well, what if I told you that there are well over 2,039,000,000 people worldwide who believe this? Still, this is not enough. There exists still a great number of people who think these notions are absurd, or know nothing of them at all, and some of them are children. Well in 1975, a couple of young forward-thinking evangelicals came up with a brilliant strategy for witnessing to the most malleable of Earth's beleaguered populace, the fucking kids. Jim and Tammy Faye Bakker had just started their own television ministry in North Carolina, the fledgling PTL network. It was here they first introduced two loveable characters, a borderline retarded Alligator named Ally (voiced by Jim) and a cloying pig named Sue (voiced by Tammy,) that looked suspiciously like Porky Pig in drag. See Jim and Tammy understood that lying to children is easier done with puppets, and ventriloquism is easier done on records. Hence the album bearing the gramatically stunted title, Oops! There Comes a Smile was born. Side one is a collection of some of the weirdest, most uncomfortable hymns to Jesus ever comitted to tape. When Sue sings of her love for JC it seems rather inappropriate. Take for instance the song Happiness Is to Know the Savior where Sue ecstatically sings "Jesus and me in close relations/Having a part in his salvation." I guess there's more than one way to feel the love of Christ come all over you. And this is hardly the most twisted song on the album, oh not by a long shot. There's the track God Is Watching You All the Time, which tells of an omnipotent creator who watches everything you do including extorting money from your ministry or banging your secretary, which Ally, I mean Jim, coincidentally did in 1987. And what about Heaven Is a Wonderful Place? In this song Sue sings of her eagerness to die and "see her saviour's face." Well, in 2007 Sue, I mean Tammy, got her wish when she died of lung cancer. Cancer was like her golden chariot that delivered her into Jesus' arms, cancer is a wonderful thing. Then a bit off topic is the cut I Wonder. It is here where Ally and Sue wrestle with their uncertain futures and wonder what career path they should choose. While Sue deliberates on whether to be a "nurse or a teacher or a mother of three,"Ally contemplates a future as a policeman, a firemen or a fisherman. Ultimately these two animals decide to not decide and let Jesus solve this conundrum by choosing for them. Nietzsche famously stated that god is dead, but Ally and Sue claim he isn't in the rollicking jam God's Not Dead. Who are you to believe, one of the most influential philosophers of western civilization or a pair of doltish animal puppets? I know, tough call. Side two has some bible stories told by Ally. I have never successfully made it through side two. There is no shortage of disturbing christian children's records collecting dust in the Goodwills of the red states, but the songs on Oops! There Comes a Smile are perhaps the most bizarre with their blatant message of subservience and forfeiture of mind. To the rest of us evangelical christians are fucking creepy, and Oops! There Comes a Smile does little to change this, but is it really possible that 2,039,000,000 people, an alligator, and a pig could be that fucking stupid?
Jesus!
Posted by Aesop at 12:19 AM

Your writing cracks me up endlessly. I just had the worst fucking day and came home to almost get in a fight with another douchebag hipster downstairs at the Bean Bag. This post(with a giant beer)made it all better and I haven't even listened to the fucking record yet. Thankyou.

Glad I could help, Ron.

dude, your write ups are the best, i was reading this on the bus on my way to work and was literaly cracking up out loud. the look on business peoples faces when they see my longhair and black clothes clicking away on my Hp 17" laptop always gripes their asses i know
but yeah man this had me wondering how many of these fuckfaces are all a bunch of 'believers'
hahaha
and yeah i havent listened to it yet either

This is one of the most disturbed and disturbing recordings I have ever heard. And I LIKE creepy and disturbing. I have deleted this for all eternity, hopefully. Yikes. What kind of person can speak and sing in such a weird voice, tone, intonations, squeal timings. The lyrics are soul-grating. ugh. This is beyond creepy. It's Cah-RAY-zeeee! Put it in the Prinz-horn collection.

I admit to watch the Prophecy Club videos on a regular basis but this is even funnier! yeah, good god fearing right wing christians - nothing´s funnier!

Great description, Aesop! It's completely spot-on. My fellow, DJ at KZSU, Big Chief has used "God's Not Dead" to intro his show. Then he usually goes right to the Dwarves or Exodus.

I just saw this at the thrift store recently too!

Ah, good ol' PTL. The hair, the blurry, smeared-with-vaseline camera lens, and the generous helpings of crazy. Was it Jim-n-Tammy Faye or Oral Roberts who told viewers that they could resurrect a dead relative by putting the corpse in front of the TV set when the show was on?

Amongst everything on here, for some reason, this record is the one that actually scares me, because it brings to mind a large section of my family. They're sweet people and all, but, sometimes, when I talk to them, it really worries me that they work for the federal government--and I don't mean cleaning toilets in the Capitol.

Funny sotry: When my niece came over, we played "Good Samartian" for close to an hour. She'd just like, lie down on the grass, and she'd have me carry her to the driveway. There was this Bible quote she wanted me to say each time before I picked her up; I forgot what it was, and am currently too lazy to look it up. Then she'd go back to the yard, wash, rinse, repeat. Like this album, the game started off kinda cute, but after a while got all David Lynchy and shit.

At least she didn't want to play "Daughter of Japtheth."

Thank you for posting.

I really enjoy your blog. I have discovered some great music here recently and rediscovered some music long forgotten. I appreciate your writing style, your sense of humor, and your broad musical taste and knowledge. Thanks for that...

However, I was really kinda disappointed at this nasty attack on people of faith, as if we were all a more twisted and stupid version of Ned Flanders. I am a person of faith in Christ, yet I also love music - especially metal of the doom and stoner variety. Heck, I will even cop to enjoying an occasional black metal album. I disagree with the world view of many bands and artists (some vehemently) yet I recognize their talent and art as valid and sometimes even moving. I'm not writing to "convert" you, attack you, or anything like that. I just want you to know that you may be surprised who reads your blog...

Just found this post after clicking the "religious" tag.

I am far more scared of this than the "Satanic Black Mass" you just posted. Far more.....

I had this album growing up. Don't ask me why. I just remember having it and then later in life realizing who these fools were. I think this surely drove me to the path of darkness i now tread.

Would you double over in laughter if I told you that the world was created through pure coincidental magic even though the spontaneous creation of matter has been proven to be unscientifically possible?

This is quite possibly the best write-up ever. Thanks for posting this.