Destroy What Bores You On Sight! 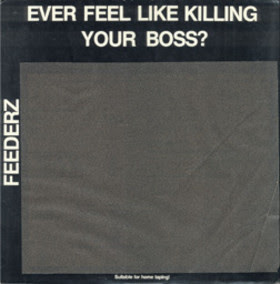 The Feederz, Arizona's nihilist-Situationist-punk geniuses were the greatest band ever, period, end of debate. But if you need convincing, let me first start with the cover of their debut album, 1983's, Ever Feel Like Killing Your Boss ? It's fucking sandpaper. It's meant to destroy whatever records it sits with in your collection, it hates your other records, it hates your boring life. The whole thing, packaging, lyrics, and music spew vitriol and venom over anything from religion to government to love to school, while lauding terrorism, necrophilia, anarchy, destruction, and lawless rage. And all this is done with a certain poetic flair and sneering sense of humor. Mainman, Frank Discussion gained some notoriety by gluing live bugs to his closely shaven head at shows (so punk), and drummer DH Peligro went on to play for the Dead Kennedys. Which brings me to the music, if you have never experienced the magic of this record, imagine the DKs with more hatred. In fact after hearing The Feederz, the Kennedys seem sort of tame. As provocative as Jello Biafra can be, I can't imagine him penning anything like the lyric "You thought it would be cute/ you thought it would be fun/But wait 'til I split your shitter with a soldering gun" from the Feederz best known track Jesus Entering From The Rear. Here's another gem, "You told me you love me/ I wish you were dead/ Use that word again and I'll blow off your head" from L-O-V-E (Another Damp Thing). Still not convinced? Well fuck you.
Here
Posted by Aesop at 12:03 AM

one time when i was 15 my mom just casually started picking thru my records that were on the floor in the living room,and found "Let The Eat Jellybeans",the alternative tentacles comp that had "Jesus Entering From The Rear" on it,and when i got home she was all "what the hell is this shit?".. there was also some shit by Possessed and Suicidal that she was all weirded out by. not long after that,i had to go to a school board meeting with her cuz they wanted to expel me and they had a overhead projector with all my folders with band logos and punk and metal lyrics on em..
and i was into much more underground shit than most a the other kids at tracy high too hahaha

wasn't that the band I saw at gilman street that crucified a middle-aged transsexual that looked more like gary neuman than jesus? danged if it wasn't the same bunch of dudes.

One in the same, my friend. I was there.

Damn good call on The Feederz. I too had the "Let them eat jellybeans" comp, and never forgot "Jesus entering from the rear"

Damn,I heard Frank Discussion had a problem with women. He also took off with Jello's money after hiding at his house when the cops came after him.

Great Post! I got the Teacher's In Space record on my blog. Check It Out! Keep the good stuff coming!

I heard he took off with Jello's woman as well.

My mum's "what the hell is this?" moment was when she found my toy M16 custom-made with a DIY bayonet HA HA HA.

they just dont do hard core like this anymore

I saw these guys in 86 at the No Bar and Grill in Muncie Indiana.
Fuckin' skin head in the pit kept screamin' for Jesus Entering From The Rear, even AFTER they'd played the song once.
I think a couple kind audience members ended up dragging the guy up the stairs and kicking his ass in the Alley.
I too had the Let Them Eat Jellybeans Comp on vinyl. Same skinhead kicked-out of the Feederz show stole it from me.

This is great album. It would have been even greater gimmick if they put sand paper also INSIDE the covers.

Never heard that 1st record... Had Teachers In Space, though... pretty damn good. Came with a bumber sticker in it that read "Vandalism: Beautiful as a Rock in a Cop's Face!"... Jayed Scotti played drums after D.H. Peligro left, and quite well I might add. I knew him and he introduced me to Frank Discussion ,who-drunkenly showing me and Winston Smith the power of pressure points and body mechanics- propelled me 10 feet back by poking my chest! An acomplished martial artist, and an artist in the prankster, Joe Coleman, Boyd Rice sort of way.

I have heard many great Frank anecdotes, the guy is/was amazing.

Holy shit! This is the first punk record I ever really obsessed over, and few have impacted me the same way since.

My best friend got expelled from high school for playing "1984" over the intercom system. I still don't know how he pulled that off, but it was a fucking TRIUMPH.

It still tickles me to no end when he says "stick a broken coke bottle up your cunt".

Thanks for the nostalgia!

about two years ago, at a village discount on the north-side of chicago, i found this record (with the sandpaper still intact), along with flipside volume 1 compilation, and motorhead's "what's words worth?" on astan records--nothing too rare, but each only twenty-five cents!

great post, along with virtually every other post. i am writing this a little late, but now that i have a computer, i frequent this blog. this is a timeless library of pain. thank you.

Jesus entering from the rear...it just doesn't get any more evil than that.

Oh my sweet jeebus! I love this record and was recently lamenting the fact that my LP is tucked away in storage right now. Thank you for a swift solution!