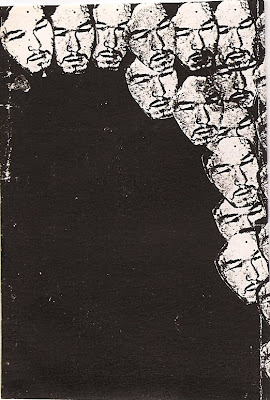 Around 1990 my friend Mari Kono went to Japan on some photography business. While over there she saw a band that thoroughly blew her mind, and knowing what an absolute music nerd and creepy Japanophile I am, she brought me back two CDs and a demo tape. The band was called Maria Kannon, and it was their odd xerox collage layouts that won me over before I heard even a note of their music. Oh, the music, it lives up to any and all expectations laid out by the artwork. Imagine, if you will, a more psychedelic Birthday Party, a sort of post-punk acid rock hybrid fronted by a very melodramatic and depressed yakuza dandy. Mari relayed how during the band's long instrumental passages, this enigmatic frontman would lay on a pile of pillows near the drum kit and weep. Fucking unreal!!! A strong emphasis on garish fashion and androgyny was evident in live photos Mari shot of the band. The pics showed them decked out in oversized fur coats and '60s mod feminine coifs. Fuuuuuuuck!
The band's name is interesting as well. “Maria Kannon” was the name of a certain kind of religious figurine venerated in Japan during the period of Christian persecution. The figurine was a way for Japanese Christians to practice their faith undetected. A statue of Mary hidden inside a statue of Kannon, the Buddhist embodiment of compassion meant Christians could worship as they saw fit without being executed. Today the Maria Kannon is a symbol for Zen practices that transcend traditional differences between both religions.
This rip was recently made from an 18 year old demo tape, so it's not the highest quality, but if there is any interest in this amazing band I would be more than happy to post their official Bloody Butterfly issued CDs at some point.
これで 友達
Posted by Aesop at 1:58 AM

hey best friend!
thanx fer th' share, 'n' like ya i can'tt get enough o' japan's take on any subgenre, so without even hearin' a single strum or squawk i says hit th' kids wit' some more!!!!

watched a couple youtube videos and found this band to be pretty ripping. thanks for the upload.

Right on, baggz, you rule.

This is awesome man, definitely interested in more stuff!

This is a real gem. I'd love to hear the Bloody Butterfly material, too!