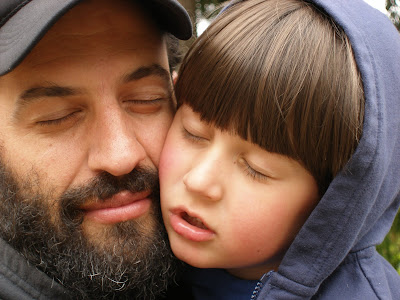 No music today, leeches, just a big ass shout out to all my Punk Pops and Metal Thrashing Dads. Real men running shit and raising the next generation of muckrakers and ne'er do wells. This is for the masters of the daddyverse, the Yngwie Malmsteems of daddery. I'm talking about real motherfuckers like Mark Underground, Saul, Danny B, E. Bryers,El Sav Larry,Stevil, John Clancy, Robzub, Scott Kelly, Milos, Dave Clark, Scott Duncan, Jason Walton, Chewy, some newbs to the club like Dave "Lord D," Ron Nichols, and Slobodan Burgher, anyone I may have forgot, and all Dads who visit this site. Dads rule plain and simple. They bring the fun, the rough housing, the tough love and the not-so-tough love. Dads know neat little tricks like how to stop a nose bleed with a match book or how to make a hangman's noose. Dad's often know when to back the fuck off and let it go. Most importantly, Dads are wizards at just making shit up on the spot when faced with something they don't know about. Dad's may yell when they're at the end of their rope, and then turn around and laugh at a fart a second later. It's the enigma of fatherhood. This is your day, Daddio, lay about in your shit-stained tighty whites and bellow drunken incoherent epithets at the TV show of your choosing. I know I will.

Oh, and I am blowing off work to go see Angelcorpse, Ares Kingdom, and Gospel of The Horns tonight. So there!!!
Posted by Aesop at 12:02 AM

right back at you mister father, cheers. i am spending my fathers day teaching Valentina about discharge, anti cimex and state adults hahahahahah

Happy happy father's day, aesop. You're my favorite dad, to be sure.

My, how these words ring true. To the fathers... Cheers!!

that was quite touching,
in a very mmetal type of way

Too real.lol
Thanks for the mention Aesop.
(Sweet Pic)
And a Happy Fathers Day to you ;)
I went to work today (I know it's a sin).Now I'm laid out on my back for the rest of the day watching...yep..The idiot box.
I ate steak tonight,that was a plus considering I'm on a low cholesterol diet.Dads day damn it!
Have a great time tonight!

That's swell. I'm no dad, and my dad never taught me about what shreds or rips, but I know what you mean. Thanks as usual for all the awesome tracks you put up.

Aw - That picture of you and Ezra made my heart go squish. Sometimes I still shudder to think of that story about you getting Cap'n Crunch stuck in your nose as a child and your dad crunching it up for you. Ow ow ow!

Nice. The outpour of love for and from dads is pretty overwhelmingly beautiful. Forgive me, I'm a bit tipsy. My father's day was cathartic and monumentally cool due to the absolute rippitude of Ares Kingdom, Gospel of the Horns, and Angel Corpse. ALl played very well and were very cool folks.

i will be a father in two months and with each passing day anticipation as well as anxiety grow stronger.your wonderful words came to me as a relief and a reaffirmation of the role of fathers.i hope i can be a cool r'n'r dad for my soon to be born daughter.thank you for this and all the great music.

Chris, you'll do fine. You'd be surprised about how much of what you need to know is hardwired in and quite instinctual. You WILL be sleep deprived and you WILL be scrambling for enough hours in the day to get it all together but you will never for a minute regret it or not love it. Trust me. Kids give us meaning.

Right on, man...back atcha. That is a great picture of you and your son.

My boy and I watched the Giants-A's game, which he talked some smack since he's an A's fan, and my wife made us all a steak and shrimp dinner. It was a great day. Kids rule.

I forgot to say thanks for this as well. being another dad who's tryin' to school my daughters in the way of righteous tunage (success level so far = the other day my eldest gave me shit when I turned off some Destruction to go take a shower). Angelcorpse live? lucky man... wish we got shows like that around here. cheers!

Um, I cleaned my garage and changed my oil and made some chicken enchiladas on my dad/dude day.

Hope yours was good too, bro!

Hey Aesop,
As long as we're on the subject of kids, I just want to thank you and the rest of your band for playing at the Tidal Wave festival back in July. That was a rare opportunity to take my kids out to see some great music in a cool setting. For some reason my wife won't let me sneak the kids into bars late at night to see bands. I was particularly interested in having my 5 year old daughter see Ludicra and Saros, band which both feature strong front women. Here's a pic of my daughter getting a full dose of Saros: http://www.earth-dog.com/content/wretch/digiphotos/tw114.JPG I was hoping that this experience would knock the Hannah Montana out of her consciousness, but it didn't quite work. Well there's always next year.