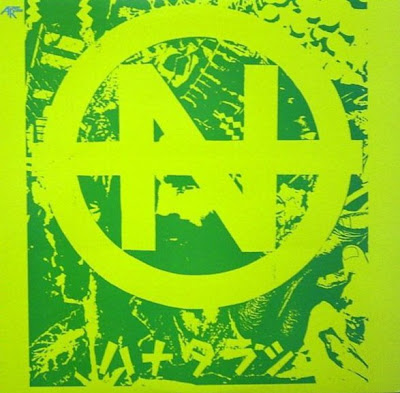 The snot-nosed, machete-wielding, molotov cocktail-hurling noise beast known as The Hanatarashi was formed in 1984 by Yamatsuka Eye, who later gained more notoriety as the singer of The Boredoms. The "band" quickly became infamous for their completely destructive and over-the-top live performances. These early shows are the stuff of legend and myth. Did Eye really destroy a venue with a bulldozer at a Hanatarshi show? Did he really almost cut his own leg off with a circular saw? Well, I'd like to believe so.
Hanatarashi's first album is a harsh, toxic wind of pure power electronic nastiness, and oh so so much cock! Not their most interesting work by a long shot, but it was their first so it's a good place to start. Later the band shortened the name to The Hanatarash and released albums way into the '90s. The momentum picked up when The Hanatarash experimented more with noise collage and the manipulation of pre-existing sounds, many from early hardcore and grind albums. The Hanatarash seemed to have an extreme reverence for hardcore, be it the makeshift graphic aesthetic or just the chaotic, anti-everything ethos of the genre. Even their logo is reminiscent of Negative Approach. The Hanatarash lived to go too far. Violent beyond the senseless, The Hanatarash were about as real as it fucking gets. Fuck You.
Cock!
Posted by Aesop at 12:06 AM

hate to say it, but i totally disagree with your comment about the reverence for hardcore. i think he tends to cut up disco/pop/muzak a lot more than HxC, and some of the song titles on subsequent albums like "William Bennet has no Cock" make it pretty explicit that he is making anti-anti-music.
thanks nonetheless for posting a classic noise album and running a fantastic, informative blog!

Ahh, Jacob, I am liking the assertion that Hanatarashi hold nothing in regard.

there are a few photos on the internet showing the bulldozer plowing through the venue walls as the drummer keeps playing. psycotic madness.

eye is totally into punk and hardcore though and hanatarash is of course punk as fuck.