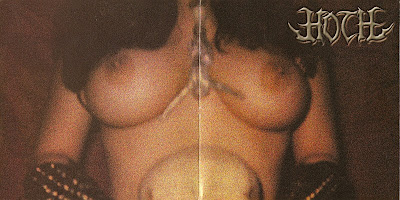 Hoth know what is is best in life, and this occult band from Portugal has been laying down their brand of murky, arcane, blackened death since motherfuckin' 1988!!! Back then, keyboards and metal were like ammonia and bleach (save for the totally brilliant Nocturnus,) but a young banger from Lisbon named J.A. had different ideas, and Hoth was born. A demo, titled Odes To My Black Goddess was issued in 1995. Many of the demo songs were rerecorded in 2000 for the first official Hoth album Rites of the Black Goddess. I don't know how these versions may differ from the original demo versions, (I've never heard the demo) but I imagine they aren't very far from the originals. The recording has a very old school black metal feeling and atmosphere, not unlike the production on Immortal's first album Diabolical Fullmoon Mysticism. The nine songs on Rites of the Black Goddess are deeply occult, monotonous hymns to the lord of the underworld. There is a simplistic beauty in the almost cartoonish orthodoxy of Hoth's Satanism. Oh, and get a look at the cover that folds out to reveal a pic of a nude, ample-bosomed woman adorned in gauntlets, bullets, and an inverted crucified Jesus holding a large fake skull just above her neatly manicured panty hamster. Awesome!
Here
Posted by Aesop at 1:10 AM

Oh man. I wish I could have a Portugese satanist death and black metal obessive flower of a GF like that.

if the music lives up to the promises that this cover makes this record is a milestone! best cover I´ve seen in a long time!

hahaha, that really is an excellent cover

"Crush your enemies, see them driven before you, and hear the lamentations of their women!"

this is great stuff, keep it coming!

impious congregation is just great. thanks for this!

I have the feeling that this band and Daath Shadow (who MUST have listened to Hoth) bought their hooded velvet capes, black candles & ritual daggers at the same Satanic One-Stop. I totally dig this album in all its sincere and naive Satanic goodness.

As a woman, I want to say I think the cover is cool is fuck. So is the term "panty hamster", which I can't wait to say in front of an unsuspecting dude.