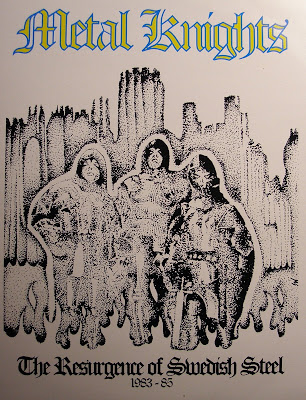 The best compilations are those almost fanatic, labor of love type, regional ones. Metal Knights:The Resurgence of Swedish Steel 1983-85 is the best example of this. Clearly, the good people at Stormbringer Records didn't just slap this thing together in order to turn a quick buck, this was painstakingly forged in the fires of passion for their nation's Heavy Metal. Each of the bands presented here never released anything on vinyl during their runs, so imagine what a bitch this was to get together. The vinyl comes with a well-researched booklet (somewhat reminiscent of those cool '80s D&D modules, if you were a nerd) with some amazing photos, well-written bios of the ten bands featured, and even a metal map of Sweden showing where the bands called hem. I had never heard any of these bands before picking up Metal Knights so this was a boon to my scandi-metal starved earholes.
The album kicks off with "Pilgrim" by Highlight, three brothers from Malmö who obviously were moved to action by the works of Iron Maiden and Judas Priest.
Next up is the rather amateurish Crime with their track, "Battlefield." Crime suffers from a rather flat production and absolutely shitty (not in the good way) guitar sound.
Flanged out double bass drumming leads us into "Time For a Solution" by Exist, some pimply-faced high school students who absolutely bring the steel. This is a standout track, sadly Exist only eked out one demo before calling it a dag. If anyone out there has this demo pleeeeeeeease share it with me.
Rubycon were a peppy NWOBHM-tinged act from Eksjö that had the good sense to have the Y in their logo be a hand throwing the horns. Their cut, "Out Of The Night" is another favorite of mine on here.
Act seem to be the most slick of the ten bands. The song "Christian Crusaders" is okay but nothing really special. Act later changed their name to Verdict.
Killerhawk just fucking rules, okay? Maybe it's the female vocals imploring the listener to "Wish Me Well" as she departs to conquer some seemingly insurmountable evil that threatens her people, whatever, Killerhawk won me over.
"Enemies" by Neptune starts off with a menacing voice-over prophesizing the fate of the Norse man's enemies, though I can't really understand exactly what this narrator says. Neptune seemed to have been even bigger Maiden fans than Highlight. Neptune seemed to be a band of almosts, they almost signed to England's Heavy Metal Records, and their vocalist Reine Alexandersson almost sang for Yngwie's band. The dude does have some serious pipes.
Orion's Sword are up next, and their track "Atomic War" isn't bad but has very little going for it.
Another favorite track is "Voodoo Night" by Stormbringer. There's a sluggish quality to the song, a classic metal guitar tone and a reference to a black mass, totally awesome. Most interesting is that a couple of Stormbringer's members ended up in the band Mercy, who you may know as the pre-Candlemass outfit, Messiah Marcolin.
It would seem that Metal Knights:The Resurgence of Swedish Steel 1983-85 saves the best for last. The questionably named Shylock closes out the show with "The Chosen One." Did these guys have some kind of semitic theme to their metal? I don't know. I do know that while their brand of metal isn't the most original (the vocal refrain in the chorus is a bit close to Maiden's "The Trooper") it is made up of all the things that make metal good....Great solos, galloping rhythms, a falsetto scream that follows immediately after another ominous voiceover. Shylock enjoyed a bit of commercial success, but only after relocating to Los Angeles and morphing into a shitty glam coke-metal band called Shotgun Messiah. Bassist Tim Skold ended up in Marilyn Manson, replacing Twiggy Ramirez in 2002. Weird.
As if the great and rare tunes and excellent booklet weren't enough, the vinyl is blue and yellow swirled vinyl in homage to the Swedish flag. This truly is geared toward the obscure metal-obssessed record collecting dweeb. It's long out of print and probably not coming back anytime soon. Fortunately for you I'm in your corner. Now go forth my bror and syster of metall and taste the steel!
Här
Posted by Aesop at 12:04 AM

Any idea on the name of Exist's demo? I'll get in touch with my horde of Swedes and see if I can track it down.

The Tim Skold connection is weird. He also had a shitty industrial band of his own, called simply Skold, that I heard on some promotional sampler back in the mid 90s.

Right on, Eric. The demo had no title, 3 songs released in '84 and that is all I know. Any Killerhawk material would be greatly appreciated as well.

It's small world! I'm the guy behind Stormbringer. Seems like this LP has received somewhat of a cult status these days. People still ask me about doing a vol. 2 which probably won't ever happen considering how time consuming this release was.

Unfortunately I lost tons of e-mail addresses to members from these bands in a PC crash a couple of years ago, but still have all the demos on CD's and tapes. If there's any band you would like to hear more of, let me know.

Fore more info on Stormbringer and my other releases, check www.myspace.com/stormbringerrecords

Right on, Stormbringer. It's a great album, and I personally thank you for taking it on. A volume 2 would be glorious. I'd always be down to hear more from Killerhawk or Exist. I also have some Swedish rarities in my wish list at the right side of the page. Thanks so much.

I've never posted any mp3's in my life, so I hope I haven't fucked anything up. Don't know how to post a file with all songs, so it has to be one file for each track.

Don't think I have the Killerhawk demos on CD, so I have to transfer them first. Will take me a while.

That worked, Stormbringer. Thank you very very very much. Anything I can do for you just ask.

Well, I'm always looking for obscure 80's stuff (demos, live & rehearsal tapes). I only collect lossless stuff though. You don't have anything from the Tidal Wave festival btw? Any old 80's SF bootlegs?

Looked around and noticed I actually have the second Killerhawk demo on CD. Unfortunately the guitarist that I was in touch with didn't include the first tape they did on the disc. I'll bring out the tape for you later on. I the meantime, here's their 1983 demo...

02. Shadows Of The Night
http://boomp3.com/listen/byx9zu4nk_3/02-killerhawk-shadows-of-the-night

04. Hang On The Line
http://boomp3.com/listen/byxdbes9a_v/04-killerhawk-hang-on-the-line

Killerhawk actually did a one-off reunion gig at a local festival shortly after the Metal Knights LP. They played with Faith (post Stormbringer), Overdrive and some other old local non metal bands from the 80's.

Hi, nice review!
Lol, it's a small world indeed. I'm the guitar player in HighLight (First track on the Metal Knights album). Believe it or not, but we are working on a follow-up to our 1984 demo tape. It's a slow process, but we target to release some new tracks in the fall 2008.

Anyone interested in our old stuff can check it out at http://www.myspace.com/highlightsweden

Wow, this post really brought some folks out of the woodwork. Mike, awesome news, be sure to let me know how I can get my hands on more Highlight material, I am a fiend for the old Swedish metal.

Stormbringer, I assume that "lossless" means actual hard copy product. I do plan on posting some rare Bay Area stuff (Legacy demo?) Tidal Wave was killer. Hirax absolutely ruled, and Exodus was fun but I am not that into their new stuff. My band, Ludicra, even got to play. Video here:

I'm the fat guy on drums. Here's a killer video of Hirax:

Next year you should come out.

Another dose of obscure Swedish 80's metal for ya! This is from an old worn out tape copy, but hopefully you'll it enjoy it anyway...

yeah Mr. Bringer, you do rule.
Any of you guys have the Silver Mountain 7" on mp3 ?

thanks for the long list of Swedish hitz, all . . .

I have an original copy of the Silver Mountain 7" - a lot better than their later LP's! Also have a bootleg CD somewhere that has several rare Swedish & Danish 7":s including the Silver Mountain one. Not able to transfer my vinyl copy, but could easily upload mp3s from the CD boot if you want?

I think the Crime song is the best on the album. Just so incredibly epic!

awesome comp!!!!!!!
thanks for posting this.
Neptune "Enemy" will be stuck in my head for days!!!!