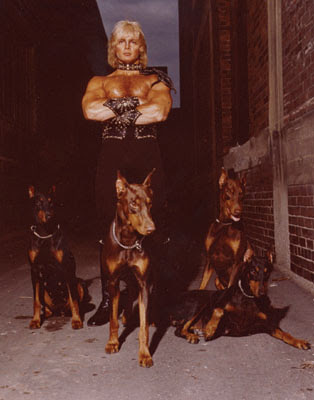 Who can dispute the pure awesomeness that is Jon Mikl Thor? Motherfucker has been both Mr. Canada AND Mr. USA (is that even legal?), an actor who starred in the films Zombie Nightmare and Rock n Roll Nightmare, and of course the frontman of the band Thor. Here I present Thor's debut from 1977 Keep The Dogs Away. This album isn't at all like the standard power metal of his subsequent '80s releases, it's poppy glam ala Gary Glitter or Sweet's more sugary numbers. Thor also serves up some excellent lyrics about how thoroughly kick ass he is and how proud he is of himself, and why the fuck not? Can you bend steel in your teeth or blow up a hot water bottle with your sheer lung power? I didn't think so.
Here
Posted by Aesop at 12:00 AM

Just want to thank for all the stuff you've been putting on your blog. This is really a blog with a difference and perfectly fits the description hard to find and special recordings! Most of the stuff I really enjoyed, no more what style. This is what made these records so cool, they did their own thing.
Excellent!!

Best I've seen Thor was at that CW show in about 2001 with the bending of steel and the popping of hot water bottle. He can't do the latter any longer because he fears the next one will kill him. Thor, you kinda fucking rule.

This record is fantastic.

Thank you for sharing the total awesomeness that is Jon Mikl Thor.

Now when I feel down, I fantasize about Thor riding in on his chariot to my mediocre place of employment and letting the blood run red.

Thank you for bringing an important piece of Canadian metal culture to the table. You've done my country proud.

I just need to thank you again for this record.

This may be a serious contender for "favorite records of all time".

"Where the fuck is Thor? Come all the way to New York and fuckin' Thor isn't here. What about Von Lmo?" That's the second time I've quoted Tesco Vee on the Hearse.

"he's keeping the dogs away" replies an audience member :)