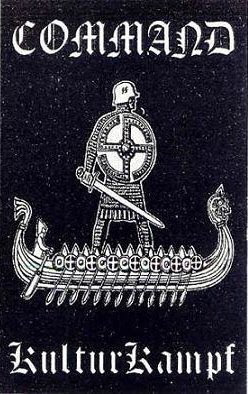 This cassette is by far the weirdest bit of Third Reich fetishism ever to come out of the shadowy world of Nationalist Black Metal. Command are the concern of one lone hater from Brazil named "Herr Wolf." Beyond lo-fi, beyond ugly, Command play raw, RAC-inspired, basement black-punk, layered in greasy hiss, and more hateful than a pack of retarded hungry dogs in a Sao Paulo ghetto. Occasionally the racket is broken up by soundbites from the glory days of Germany, when people were happily governed by well-dressed closet homos who won them over using a combination of stylish presentation and unfettered racial scapegoating. While Command loves the latter, their beauty lies in their total rejection of the former. Again I add the disclaimer that if you are squeamish and sensitive to the fact that the world is full of bad people that are full of irrational hatred and fear, I suggest you stay away from this one. Anybody else interested in primitive 4-track recordings about Nazis will find this to be a score.
Here
Posted by Aesop at 12:04 AM

Almost as deliciously retarded as Germany's Absurd. Are these neo-nazi dipshits so full of unbridled hatred that they're too impatient to so much as tune up before they get it on tape? Whatever, as long as they keep doing it. The immediacy of this stuff keeps me coming back.

I had to laugh hard when i gave it a listen."You know some people don't take no shit. Maybe if they did, they'd have at least a brain left" (Dead Kennedys - A child and his lawnmower)Think i delete that...

"the glory days of Germany, when people were happily governed by well-dressed closet homos"

well, it hasn´t really changed that much! maybe people aren´t happily governed by Merkel and it´s closet homos but besides that it´d still the same!

Awesome, thanks. Haha, what berks.

like a fucked up early gism demo when it gets going

The mix between the lo-fi hissy metal tracks and the old-timey WWII pieces puts me in the mind of a mixtape that a Nazi high schooler made for his girlfriend: even though he knows how to RAWK THE FUCK OUT he's an eclectic guy who likes the classics too. Their love is perfect, until he walks in on her listening to Ata Kak, thus laying bare her corrupt mud person nature.

Well put Melrubso. Kind of like the kids in the film Baxter.

Funny someone who plays in one of the bigger hipes in today's "black metal" calling anyone else "homo". I won't even mention the typical fanbase of your hippie rock band.

Herr, you are precious. Keep on fighting for the cause

on the inter net