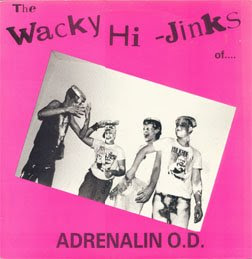 Due to this awesome video of Fenris of Darkthrone drunkenly extolling the virtues of Adrenalin O.D. to a portly, ball-washing German journalist, I was reminded of how awesome this album is. Kinda weird that this raging slice of funny punk would be the American punk record that a figurehead of Norwegian Black Metal would go all gaga over... but I'm with him, it's a cool record.
Here

Post note: Once again Cosmic Hearse and Only In It For Whatever ride the same wavelength on the same day. Here's Slobo's post on Fenris' love for the punk rock. In this case it's Swedish punk rock boy band, Puke.
Posted by Aesop at 12:02 AM

That was one of the first Punk/Hardcore albums i bought! It's fantastic.

I've been wanting this for years, thanks.

HA HA HA. That is so weird. I am starting to think you're doing this on purpose Aesop!

The vid, yeah I did see that too today - through following links from somewhere to other, ending up on some blog dedicated to Fenriz worship (is that how you saw this too?)...ha ha

Actually I feel like I saw the video on Metal Inquisition some time ago, I could be wrong. I knew he was a fan of some obscure punk and hc, but was pretty astounded that he would know of, and be all giddy over AOD. The Puke thing seems more likely, they were pretty well known in Scandinavia, no?

that interview is great.Fenriz is absolutely hilarious(not to mention the BIG german guy who interviews him).that's a video that should be seen by all black metallers who take themselves too seriously.and all those hardcore tough guys should listen to Adrenalin O.D.hardcore can be hard,furious and fun from time to time.thanks once again Aesop.

Yeah, sure, I certainly knew about them when I was really young. I think they were on one of the classic compilations of the day, like perhaps it was Really Fast vol whatever. Back then never thought them favorites nor truth be told much to get excited about...but today that record proves some lasting power qualities...

Someone gave me the Misanthrope DVD last year, haven't watched it yet...kinda just thought "norway" and threw it in some box somewhere...will watch it later.

being from NJ and beind in a shitty NJHC band back in the day we got to see and play with AOD many times! Great band and this a great fucking record!

An all-time favorite of mine for sure.
And yeah, it's me - I thought you knew all along.