Jesus Was A Faggot Jew! 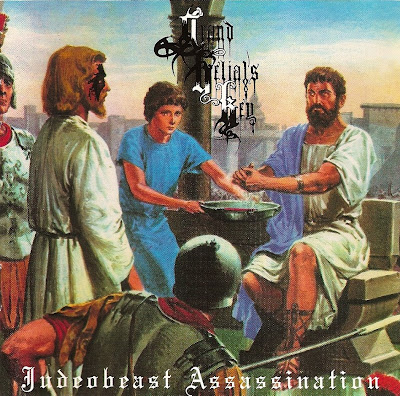 Grand Belial's Key are one of America's first and best Black Metal bands. Grand Belial's Key, like Nunslaughter and Profanatica, seem so obsessed with their hatred and inversion of Christianity that it borders on cartoonish. It's almost as if the members never grew out of the sort of crass blasphemy that was so exciting to them as adolescent boys in parochial school. With titles like "Satanicunt" and "The Shitagogue," you can almost hear the juvenile titters of complete self-satisfaction as GBK rail against all that is holy. Now here's the catch, Judeobeast Assassination rules! Every meat-headed, sacrilegious minute of it is brilliant. Like Nunslaughter, GBK are a purely American sounding entity, no twee, trebly norse-core here, just Christ-bating hate set to some of the best riffs this side o' the pond. Rather unlike Nunslaughter, or Profanatica, Grand Belial's Key are willing to take some chances with their songwriting, offering a bit more than the standard verse/chorus/verse drudgery. They are also unafraid of making provocative statements about jews, Jesus, and anything pertaining to judeochristian religion and its utter fucking gayness, if that type of shit gets your panties in a bunch then miss out on one best black metal albums of all time, I don't fucking care.
Here
Posted by Aesop at 12:00 AM

Best black metal band ever. Period. Then you've got (sorta) sister band Arghoslent who are one of the finest exponents of death metal-- moronic or not, they bring thee riffs like nobody else. Too bad about Richard Mills (great death gargler!) croaking and GBK's ultimate dissolution because of it-- I'm sure there plenty more classic platters left in 'em. And yup, fuck all the anti-metal pansies-- that retarded philosophy of it being something you're supposed to outgrow at age X is strictly for collegiate types who don't realize they're the ones listening to shit.

'then miss out on one best black metal albums of all time...'

amen! (no pun intended). this album is seriously good.

ah now this is good stuff! I wasn't quite as fond of their final album Kosherat as I am of this one and Mocking the Philanthropist but you can hardly go wrong with anything this band has recorded. Possibly the best American black metal band ever in my humble opinion. The only negative thing I can say about GBK is that as good as they are I think the unfuckwithable Arghoslent is even better.

I probably am missing out on some great riffs, but GBK or Argh wouldn't want a lefty queer subhuman to listen to them anyway.

Oh, & if Jesus was a Jew, how come he had a Mexican name?

I once saw an episode of what must've been either the Ricki Lake or Jerry Springer show, wherein a pentagram-wearing dyed black hair-sporting woman proclaimed with a straight face, JESUS WAS ARYAN! This to combat a nigh-on incomprehensible audience member who asked the question How can you hate us Jews so much, Jesus was a Jewish!!

Man this album kicks ass! For some reason I ignored these guys for years, perhaps it was the blatant anti-religious angle bordering on comical? But I have to say the riffs here are some of the best, I really can't compare it to anything else. The production is great too!

The most cartoonish part of GBK is their use of MSPaint to put corpse paint on Jesus on their album covers. Yes, we shall desecrate your Jewish face with bitmapped pixels!