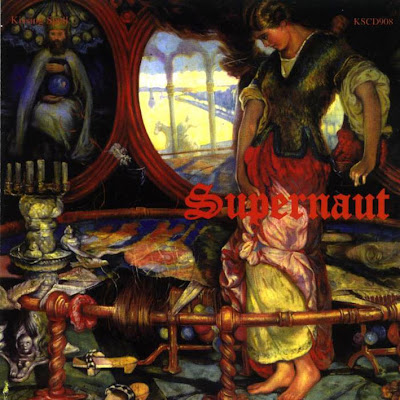 I know it may seem that I am being stingy with the words, like I'd rather smoke weed and watch poor people sue each other on TV all day instead of trying to think of clever new ways to tell you how weird, and kick-ass, and totally obscure this album is, but really I just don't know shit about this, and I would rather get stoned and watch TV. However, I DO know Supernaut formed in 1973, and these cromagnon rockers called England home. Clearly they loved Sabbath, clearly they had no budget behind the recording of this album, and they definitely didn't spend a whole lot of time honing their chops before committing this to tape. I don't even know if this was properly released in the seventies, it was, however, released on cd in 1999. If you dug the homespun downer doom of The Wicked Lady you'll want to look into Supernaut as well. Not progressive rock, but regressive rock, call it "Reg Rock" for short.
Here
Posted by Aesop at 3:25 AM

Funny - I just grabbed The Wicked Lady tunes yesterday...and woke up to this. Yet another excellent post Aesop.

aesop, as you seem to have quite a Black Metal collection...don´t you have SANGRAAL´s Gemini War Demo?
you know if someone from SANGRAAL wouldn´t have confirmed that it exists I think I would´ve my doubts about the sheer existence of that tape.

I assume you mean the American band Sangraal. I am familiar with their "Unearthly Night" demo, which I found to be average, but I know nothing about the demo you mentioned.

yup, but I think there are 2U.S. bands that are named SANGRAAL. I mean those SANGRAAL that consisted of GEHENNA members and released a 12", called WOLVES OF ARMAGGEDON on Wicked Witch records.

I think the SANGRAAL with the Unearthly Night demo have not more in common with this SANGRAAL than the name!

Aaaah. Don't know them. I'll keep an eye out.

if you´re interested in SANGRAAL´s music the WOLVES OF ARMAGGEDON 12" can be d/l here:
http://sunold864.blogspot.com/2008/06/wolves-of-armageddon-2nd.html

You familiar with the other Supernaut, the Aussie glammers who did "I Like It Both Ways"?

I have heard of them, but never heard them.

This is fun stuff.

They really pound those riffs into the ground, don't they?