The Blackening Of The Arctic 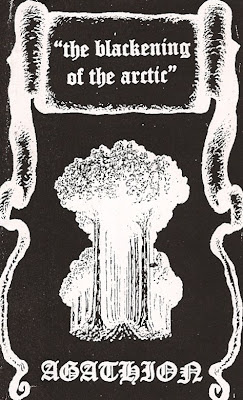 The northern lands, summer is short, winter is long/Harsh brutal cold, life is a battle against the earth, against the ice, the darkness.
Agathion were a Black Metal band from Quebec and this demo titled The Blackening Of The Arctic was the band's only output. It was released in 2004, and limited to 300 copies.
Here
Posted by Aesop at 12:00 AM

THank you you keep adding fuel to the already burning fire of my black metal collection.

finally got around to listening to this. Pretty cool thank you

Ha, this is my old band. I guess we did a trade at one point. I dont really remember.
Your blog is great, keep it up! Thanks!