The Name Is Plissken 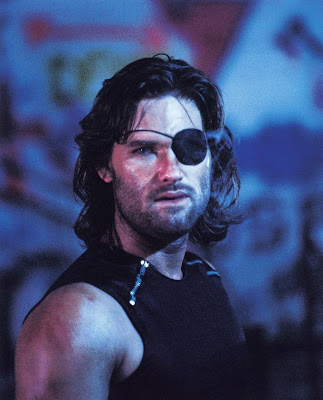 John Carpenter once claimed that he did his own soundtracks to save money. Well, fortunately for us, Carpenter's frugality makes for highly entertaining musical accompaniment for highly entertaining movies. And let's face it, if you are going to make an a post-apocalyptic epic with Kurt Russell, Isaac Hayes, Ernest Borgnine, Adrienne Barbeau, Harry Dean Stanton, Donald Pleasencene, and Lee Van Cleef, you can't entrust any bargain basement John Williams to handle the score. With Escape From New York, Carpenter's minimalist synthesizer noodlings compliment his future-of-the-'80s vision perfectly. John Carpenter prophesized that in 1997 New York would be a maximum security prison and that music would sound like the demo mode on a 1980 casio keyboard. Chilling how spot on he was.
Here
Posted by Aesop at 12:00 AM

All right! I love this movie, Kurt Russell's best performance next to Stunt man Mike!

terrible dystopian film. mad max....theres a good one for you

Carpenter's best score next to Halloween and The Fog.

I have been coming to your blog for a while now and although I already have a copy of the Escape From New York soundtrack, I’m elated to see that it’s listed in your archives. You have no idea what this soundtrack means to me. I know that’s a bit corny, but aside from the Prophecy Theme by Brian Eno from Dune, this is the best score I have ever heard. Maybe it’s because I was a little kid in the 1980s and my brain has been warped by the countless hours of MIDI video game music that kept repeating while a computer chip tried to constantly defeat me. I cannot say for sure.

I remember when I first heard this soundtrack isolated from the movie that I had a pseudo-religious experience. I did not see god and I did not realize what humankind’s mission on this planet is, but I did feel that somebody made music that cleared my head, which is quite difficult for I am sure that if I was properly analyzed, I would be diagnosed with severe A.D.D. Aside from the Eno track from Dune and the Mountain album Climbing, there really are not any records that accomplish this.

Thank you for posting this.

If you happen to have a copy of the score from Carpenter’s film Dark Star I would be eternally grateful. All hail the Cosmic Hearse!