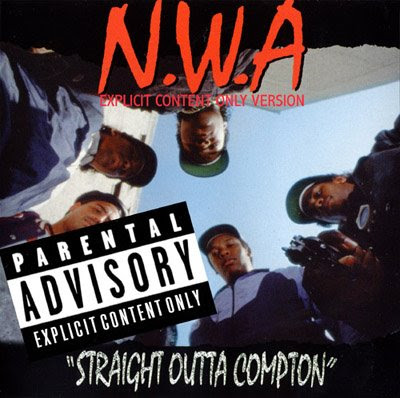 The year was 1988, and a 17 year old me was living in suburban south Florida. A friend of mine played me a record called Straight Outta Compton by a young rapping group from Los Angeles called provocatively enough, Niggaz With Attitude. It was the angriest, most unapologetically violent record I had ever heard, and this includes anything by Negative Approach. As a white guy, it made me a bit uneasy. I had to have it. I headed down to Sears department store and crammed the CD into my pants, I wasn't really into paying for shit back then. But the last laugh was on Sears, when I got home and put it on it was not the same record I had heard the day before. Upon closer inspection I realized that I had boosted the "clean version" devoid of expletives, Nigga Titties Damn! These Niggaz had considerably less attitude, and I wasn't having it. Worse than non-alcoholic beer, or meatless sausage, a clean NWA is without merit or use.
I wonder if San Francisco based artist/typographer, Evan Roth had a similar experience as a youth. Perhaps this is why he edited NWA's classic, as well as Eazy E's Eazy Does It album down to ONLY it's explicit content. Whatever the reason, it more than makes up for my disappointment some 21 years ago. So here it is all the damns, niggas, titties, ho's, fucks, asses, dicks, pussies, shits, motherfuckers, and bitches without all the other cumbersome nouns, adjectives, verbs, articles and other motherfucking parts of speech getting all up in yo' shit. I would love to hear this being bumped from some lowrider with huge speakers in East Oakland, that would fucking rule. That would be all like Nigga Titties Daaaaaamn!
Here, Bitch!
Posted by Aesop at 12:00 AM

Great post man, just your text had me laughing. I was in college in Northern California when this came out and like you was blown away. "Almost" too negative in a way, but in reality it was a wake up call as to what was going on in the inner city. From the Fresh Prince to this was a huge jump. Today it makes me realize that just as much as the establishment keeps people down, it is the people themselves who damn themselves to the lives they live. Damn that was a good post.

This has made my week. I imagine this is how Tipper Gore hears all rap.

thank you!! i've been listening to eazy does it all morning, and came to the computer to find this! i had totally forgotten about it! i have to find the easy does it edit now.

thanx for upping this. i had about 4 or 5 of these. nice to know the whole album (and then some) was created.

I've had the "explicit content only" MP3 for some time now - makes an excellent ringtone! Wondered who actually did it, thanks.

Hey 'sop, by chance could you post Raw Power - After Your Brain or send me a link or something? Been looking high and low for that and I figure you probably have that since you posted the other one - J

haha, one of my personal favorites, a few years ago me and a some close friends had a picnic on Eazy-E's grave for my birthday...oh memories, oddly enough, no 8 bottle, just falafel, Dr Pepper, and an strangely funny graveyard attendant

That rules, Svartstoy. Where is he buried? You all should have drank activator and poored a little on the ground for Eazy's jheri curl in heaven.

next time we shall, he is buried at rosehills cemetery in the el monte/montebello area, off the 60 freeway. keep doin the lords work aesop

Fuck yeah. Thanks for this and all the other badass shit you got on here.

You speak often about nostalgic albums. This cassette made the rounds of every crappy car stereo as we parked in cul-de-sacs to bake out. And we all knew All the lyrics. Thanks for this.

This totally made me laugh out loud. I'm so glad I dug down and found this. Me and my girlfriend also once went and found Eazy's grave... we were looking around for it, and then a Mexican family down the hill said "Hey! You guys lookin' for Eazy? He's right over there." Sure enough, there he was. "Eric Wright. We loved him but God loved him more." We drank cans of 8 Ball and left him one.

Eazy would've bought this dude lunch for sure...

I first heard this album in 1989 while living in the remote midwest. To say the least it was not the norm for a backwoods 11 year old white boy having his mind blown by something like this. Great memories