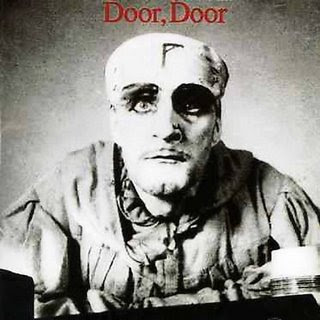 The Boys Next Door was the earliest incarnation of The Birthday Party. Not terribly unlike the Birthday Party's debut album, Door Door only hints at the absolute drug nightmare these Australian lads would become. This record is rather poppy and upbeat with the instantly recognizable voice of Nick Cave cutting through. I guess they had a minor hit down under with "Shivers." The Boys Next Door also released an EP called Hee-Haw. This EP has been released as The Birthday Party as well. Apparently Cave sees Door Door as an embarrassment, but have you seen his moustache recently? Makes you wonder if Nick Cave understands the concept of embarrassment. Cosmic Hearse thinks this is a great record, no matter what Mr. Cave and his ugly cookie-duster think.
Here
Posted by Aesop at 12:03 AM

pretty hilarious timing here... I have the Sector on hiatus and am contemplating giving it up altogether... but I gave this record a spin the other day and strongly considered coming out of hiatus to post it. heh. anyway, I agree, great record. nice one.

I must agree about the moustache, but what about those fackin' beards in Grinderman? Some kind of post-traumatic response to the middle east crisis, everybody (except some wimmen)growing Nebuchadnezzar face fuzz.

I'm coming out in favour of Nick Cave's mustache. I like anything that makes him even creepier!

yeah if you're talking about the same pathetic fuckstick I'm thinking of, he even had the nerve to post a comment on my blog asking me to link to his, AFTER stealing some of my posts.

how's that for class? yeesh.

I'm a huge Birthday Party fan, and if you like them at all, you need to hear this at least once. The Boys Next Door / Birthday Party LP is much better.

The big question is WTF is that cover all about? Obscure German Expressionist film still? Tracey Pew in drag?

This record is great, but I could see Nick's "embarrassment" since it is much poppier and dated than his other projects (although his cover of "In The Ghetto" is far more incriminating than anything on Door Door). I'd try to criticize the guy, but the last couple of Bad Seeds albums are on point and Grinderman really blew me away.

Agreed, Tim, although I haven't paid much attention to The Bad Seeds since "Murder Ballads." Grinderman is cool.

I've always wanted to hear this; thanks!!
There are definitely hints here of what would come later... "After a Fashion" is brilliant .... Very cool.

I discovered this album at the pinnacle of my Nick Cave fandom, (which has since dwindled) but I still have a warm fuzzy place for it. Almost as warm and fuzzy as Nick's mustache. I'm glad someone else is as dismayed by it as I am (it makes him looked like my dad, if my dad were a lot sleazier).

How can anyone find this lp embarrassing!? A great example of youthful innocence -- what made the best punk good. I wish more people produced such "embarrassments"...

never heard this. thanks. and i considered my self a pretty big fan of Nick Cave. now i feel shame.

i have had this lp (on mushroom records) since i was in high school...this was in '91. it was a blessing to find it in a record store where i grew up (in the middle of the chihuahua desert...el paso, texas). i played it everyday for two months after i came home from school. laying there listening to every word, every riff, i knew it was the birthday party, but i wanted to reach the source! i'm sure many of us have that itch, to reach the source or the root of something, some call us 'purists' ha ha! either way, its a bad ass record. one of my all time favorites!