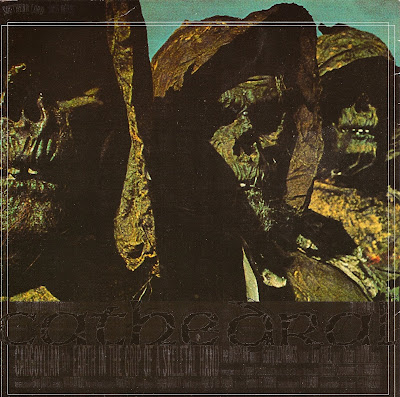 In 2001 ultra-chic doom/black label, Southern Lord released this beautiful single by Cathedral. I shouldn't have to give you the dirt on Cathedral, either you know 'em or you don't, either you love them or you don't, it's just that simple. The two songs presented here were recorded during the Endtyme sessions with Billy Anderson at the ol' mixing desk. The cover image is from La Noche de las gaviotas, the 1975 Spanish horror movie directed by Armando de Ossorio. The A side, "Gargoylian" is typical Cathedral but the B side, "Earth in The Grip of a Skeletal Hand," has them doing a sort of Discharge thing. This was released in a run of 2000 copies with the 100 on blue vinyl and 100 on gold vinyl. Enjoy.
Here
Posted by Aesop at 12:00 AM

cheers, occasionally I dig into the cathedral corner of my record collection but this i never even knew about so look forward to listening to this when no one sees me.

The blind dead want your blood.

When I was in high school, for a while all I listened to was Cathedral and the Residents.

People always give me shit for liking Cathedral but now, you have validated me. This is definitely a rare or hard-to-find record!!!

And whoever that ball sactacled, anus eared nerd burglar is can suck my faggot dick. It's probably the government, in which case they owe triple!

You should post something completely fartacular, like a Pat Boone Xmas and see if it shows up there just for kicks!

I don't understand people's reluctance to admit they like Cathedral. Sure, Lee Dorian ventures into some cheesy territory now and again but I always took it to mean they didn't take themselves too seriously, which was refreshing and rare for a metal band in the early '90s. Besides "Forests of Equilibrium" is still one of the finest pieces of doom there is.

Damn, that was actually really good. The B-side is more up my street (for obvious reasons)...

I had a metal friend who really liked Cathedral and as we had some mutual tastes in music (Discharge and Anti Cimex mostly) he always tried to get me into Cathedral while I'd try to get him to like Doom or ENT or something. But it was not until like quiate recently I started to listen to Cathedral on my own...

Funny now that I remember it, the same friend of mine actually went with his "youth offenders on probation group" to see Cathedral play...lol.

Sweet - I love Endtyme - it has some of the best vocals ever. Fuck the haterzzzz!

i never understood how blind templar knights could actually catch you and kill you. maybe only in spain with this happen *shrug*, anyhow this is sweet aesop.. cathedral is rawk

man, i LOVE cathedral, fuck the haters.
thanks for posting this!
-dan

Yeah, thanks for that!