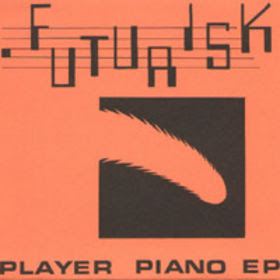 Remember a few years back there was that horrible retroshit trend called "Electro-Clash" that had hipster chicks all over Williamsburg, San Francisco, and Portland doing way too much blow and wearing fuscia leg-warmers? Remember how such champeens of cool like Vice Magazine and Pitchfork Media clamored to be the first to elevate this pathetic pastiche of analog synths and the worst Chess King clothing from two decades ago? Then it just disappeared faster than you can say "I'm totally into Black Metal Now." And sadly, the obscure pioneers of herky jerky electro-pop, like my hometown's own Futurisk remain unknown and unheralded today.
Futurisk were Miami's contribution to the world of robotic synth-oriented no wave electro-punk. They fall somewhere between DEVO and Suicide. Player Piano is one of those weird little privately pressed records that has been unfairly buried by time and disinterest. It came out in 1982, the real 1982, not the 2003 one.
Here
Posted by Aesop at 12:02 AM

all the good shows in Brooklyn come to billyburg. Such a strange neighborhood. I get the impression walking through there after a show that nobody there ever has to worry about going to work the next day.

would've been nice if Futurisk had an audience like that in 82 ;)
fla sucked then! haha!
some tracks
http://myspace.com/futurisk