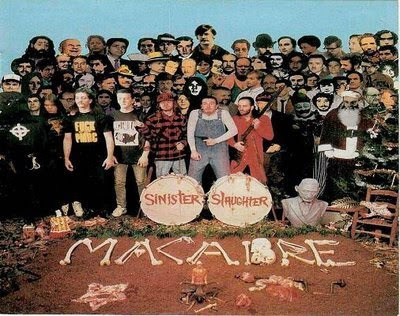 Okay, so what if I told you that the smartest guys in Chicago were a Death Metal band? Putting out a collection of 21 concise, almost jingle-like songs, each one based on a different serial killer or mass murderer, is just pure genius. This would be enough to make Sinister Slaughter by Macabre a Cosmic Hearse favorite, but these guys up the ante with a fair amount of shred. These immensely talented boneheads put a great deal of thought into their terse arrangements, as well as a great deal of research into their morbid subject matter. Classics like "What the Heck Richard Speck (Eight Nurses You Wrecked)" and "Albert Was Worse than Any Fish in the Sea" also showcase Macabre's biting wit. Sinister Slaughter plays like a flurry of supermarket True-Crime novels written by ugly midwestern hessians with severe A.D.D. and the giggles from waaaay too much ratweed. How the fuck can you not get behind that? Extra points for a Sgt. Pepper's parody cover that doesn't suck.
Kill
Posted by Aesop at 12:03 AM

dude,
i was just reading about these guys in
'Metal: The Definitive Guide'

how wierd is that?

this album is such a classic. Doesn't match up to the genius of Gloom but its close.

Plus I finally get to see them in august opening for Brutal Truth. Tremendously cool

definitely a classic. nice one.

i love this album and have misplaced it after moving a few years back. thanks for posting!

I still have a dub from the original cassette tape.

Kick me in the jimmy, as I have never heard this before. Fuckin' titties stuff for sure, thanks.